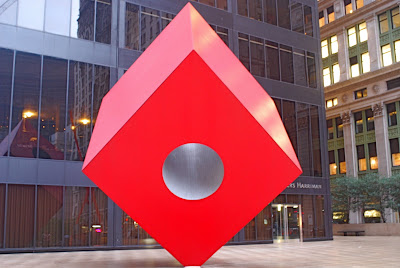 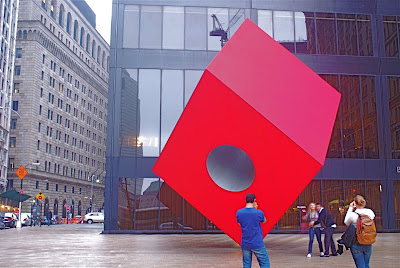 The bright red painted steel of Isamu Noguchi's Red Cube stands out in strong contrast to the blacks, browns, and whites of the buildings and sidewalks around the sculpture. Located to one side of a small plaza in front of the BROTHERS HARRIMAN (previously HSBC) building on Broadway, Red Cube is surrounded on three sides by skyscrapers, the height of which draw a viewer's eye upwards. The sculpture itself adds to this upward pull, as it balances on one corner, the opposite corner reaching towards the sky. Despite its title, the sculpture is not actually a cube, but instead seems as though it has been stretched along its vertical axis.

Aside from it's striking color, Red Cube also stands out from the surrounding architecture in that all of its lines are diagonals, whereas the buildings are made up of horizontal and vertical lines. Additionally, the sculpture is balanced somewhat precariously on one corner, while the buildings, by contrast, and solidly placed.

Through the center of the cube there is a cylindrical hole, revealing an inner surface of gray with evenly-spaced lines moving from one opening of the hole to the other. Looking through this hole, the viewer's gaze is directed towards the building behind, tying the sculpture and the architecture together.

Los Angeles born Isamu Noguchi (野口 勇, 1904-1988) was a sculptor, theatrical and industrial designer best known for his abstract works and set designs for Martha Graham productions. News was one of his last figurative works, and the only time he employed stainless steel as an artistic medium. His work can be found throughout major metropolitan cities, in museums, and in the Isamu Noguchi Garden Museum in Long Island City in New York. Noguchi's work around New York includes the Sunken Garden for Chase Manhattan Bank Plaza and News at the Associated Press Building His Thunder Rock was also temporarily on display in Rockefeller Plaza.
Posted by Noel Y. C. at 4:59 AM