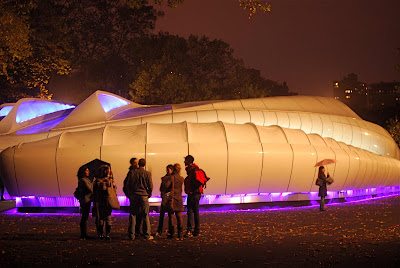 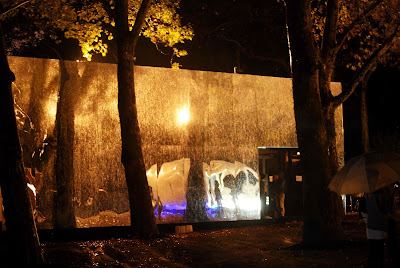 Designed by Iraqui-born British architect ZAHA HADID, this spaceship-like glass fiber mobile art gallery recently opened in Central Park. I made this image last Saturday night in Central Park's Ramsey Playfield. The structure was inspired by the iconic quilted leather Chanel bag "2.55" created in 1955 by Coco Chanel. Fifteen artists contribute to the exhibition. Central Park marks the third stop of a two-year international tour for CHANEL MOBILE ART that began on February 27 in Hong Kong. It will head to London and Moscow next year before ending in Paris in 2010.
From mediabistro.com:
On its travels from Hong Kong to Tokyo and now, to New York City, Chanel's Contemporary Art Container has been compared to a UFO, a pod, a spaceship, and an art-stuffed satellite that has floated to earth. Bruno Pavlovsky, Chanel's president of fashion activities, has referred to the Karl Lagerfeld-commissioned mobile mini-museum as an "anti-white wall space," and its architect, Zaha Hadid, described it to us as a "an entire landscape for the art work, rather than just an exhibition space." Having finally experienced the ephemeral Mobile Art pavilion in the fiber-reinforced plastic flesh, we can tell you that it is far more organic than the stuff usually associated with outer space. Now welcoming its first New York visitors, it resembles a gleaming white dragon curled up for a three-week nap in Central Park's Ramsey Playfield. We could have sworn that we detected the faintest pulses of breath in its reticulated white skin.
The pavilion's fluidity and lightness is delightfully deceiving. The steel structure is shipped to its locations (next up London, Moscow, and finally, Paris) in 74 40-foot sea containers and takes approximately a month to install. "This dichotomy between the lightness of the exterior and the powerful structural mass creates a bold and enigmatic statement," Hadid told us. "We are concerned with constructing buildings that evoke original experiences, a kind of strangeness and newness that is comparable to the experience of going to a new country—or visiting a fascinating district of a city, an area that you've never had the chance to explore."
Part of that strangeness and newness is rooted in the container's complex geometry. Developed with technology pioneered in the automotive industry, its sculptural arches create viewing areas of various sizes, scales, and levels. For Hadid, it was a way to echo the layering and fluidity prized by Chanel, whose meticulously crafted quilted handbags were the starting point for the commissioned art nestled inside. But it wasn't the tidy angles of quilted lozenge shapes that inspired the structure itself. "For this pavilion, we explored the organic forms evident in spiraling seashells," noted Hadid of the structure's parametrically-distorted toroid form. "This system of organization and growth is among the most frequent in nature and offers an appropriate expansion towards its circumference, giving generous public areas at the entrance of the pavilion to interact with the local site conditions in each city."
Posted by Noel Y. C. at 2:43 AM