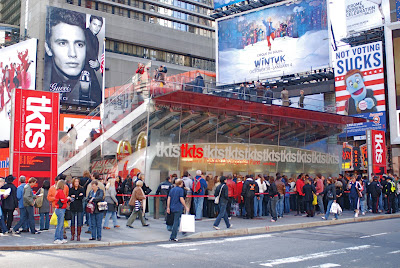 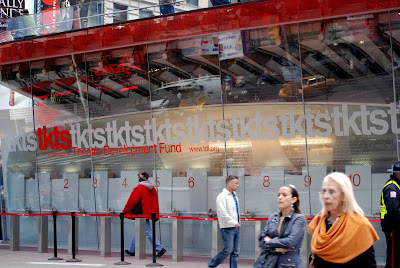 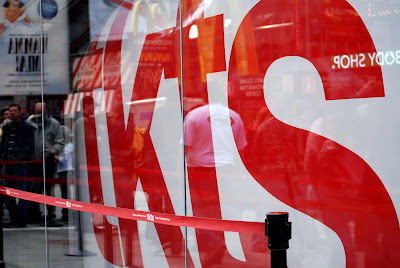 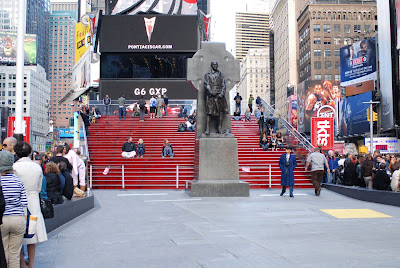 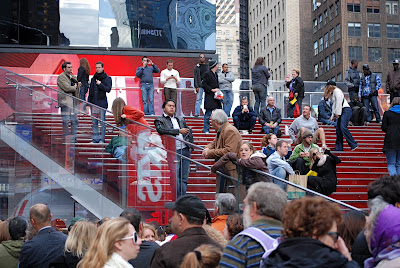 Yesterday, I took photos of the new TKTS Booth which opened last October 16. Established in 1973 for the betterment of theatres and theatre-goers alike, TKTS sells unsold tickets on the day of performance for some Broadway and Off-Broadway shows for 25-50% off the box office price plus service charge.
Hours:
Evening Performances: Monday - Saturday 3 PM - 8 PM
Matinees: Wed. & Sat. 10 AM - 2 PM
Matinee & Evening: Sunday 11 AM - 7:30 PM
From Playbill.com
The booth's function remains the same — to provide the public with cheap tickets to Broadway and Off-Broadway attractions. Its form, however, is something else altogether. Gone are the familiar canvas banners emblazoned with red letters reading "TKTS." In its place is a glowing red staircase 27 steps high and a fiberglass ticket office that looks something like space module. While some may miss the old banners (which have been donated to the Museum of the City of New York), other eliminated elements of the old booth with probably not be mourned, including: the paucity of sidewalk space; the staff's inability to take credit cards; the lack of anywhere to sit; and the cramped booth itself.
The new design was the result of an international competition in 1999. The winning entry was devised by Australians John Choi and Tai Ropiha. Their concept was then realized by the architects at the New York firm of Perkins Eastman into what TDF is calling "the most complex all-glass structure in the world."
"We had to marry the booth, the plaza, the statues [of Father Duffy and George M. Cohan] and have something that reflected the vocabulary of Times Square, but didn't compete with it," explained TDF executive director Victoria Bailey during a recent tour of the site. "That's what's nice about the glowing red staircase. It's there, it's the same idea, but it's not flashing itself, like the neon signs."
First things first: about those much-discussed steps, which were engineered by Dewhurst Macfarlane and Partners.
There are 27. They seat up to 500 people. Like much else of the structure, they are made of layers of thick glass, together with a red inlay to create the color. The steps are flecked with little silver bits called frets. These prevent a person from slipping, even when the steps are wet. The staircase will likely be lit at all times, but the red glow is not perceptible during the daylight hours, unless it is an overcast or misty day. The steps, using geothermal-based heating and cooling technology, will be slightly warmed during the winter months, to prevent the surface from icing over, and cooled in the summer so that the stairs don't become unbearably hot from constant exposure to the sun's rays.
The staircase will probably be closed late at night, just as any city park might. During its public hours, however, TDF will not frown on loitering. Citizens are welcome to take a seat, even have lunch on the steps. The perch will no doubt be a popular one, if only because of the expansive, all-encompassing view it affords of Times Square. "This is a view you didn't have before unless you were in one of these buildings" around the Square, said Bailey.
Duffy Square itself is a much bigger place than many will remember. The plaza, which was designed by Williams Fellows Architects, a New York-based architecture and interior design firm, is 115 percent larger than before; TDF claimed a car lane on either side of the square for the project. Tables and chairs similar to those found in Bryant Park and Herald Square will be placed at south end of the square. Bailey thinks the expansion will alter the nature of Times Square, which has never really functioned as a space for the public to pause in repose.
"Nobody ever came here before who didn't intend to buy a ticket," she said. "I think it will only heighten that town-meeting gathering feeling. You'll have a public gathering-area that's distinct from the booth. We'll be able to handle lines — and people who aren't on line — at the same time. There's nowhere else in Times Square for people to gather."
Life will improve for the ticket-sellers as well. The fiberglass booth, which has smooth, rounded corners and sits below the red staircase, was built by the Rhode Island-based Merrifield-Roberts, which is known for constructing America's Cup yachts. Indeed, the structure has a slightly maritime feel; the window in the back door is in the shape of a porthole. One imagines that, if flung into New York Harbor, it would float. "It's purpose-built, as opposed to a trailer that you turn into a booth," said Bailey.
Inside, each seller station is equipped with a computer and a ticket printer. With such technology, the booth can now take credit cards. A long last, theatregoers will not have to line up with hundreds of dollars stuffed in their pockets. "In the old days we didn't have the technology," explained Bailey. "The credit card technology was so slow, and we had 4,000 people an afternoon. If you even add ten seconds for every person, it makes a difference."
There are now 12 windows, sitting under a thick, red glass canopy, allowing for the lines on either side of the booth to move more quickly. TDF has hired two extra people to handle the extra flow.
Bailey is obviously proud of the TDF's new creation, from its unique glass architecture — in which thick glass walls and diagonally poised glass "stringers" actually serve load-bearing functions — to the way in which the booth tames the giganticism of Times Square, serving as a reminder that a city is not just about buildings, but the people who use them.
"This is an example of what you can do with streetscape space and intelligent design," Bailey said, adding that, traditionally, architectural considerations are usually about the building, not the sidewalks.
"Now it's about the pedestrians," she said.
Posted by Noel Y. C. at 5:57 AM