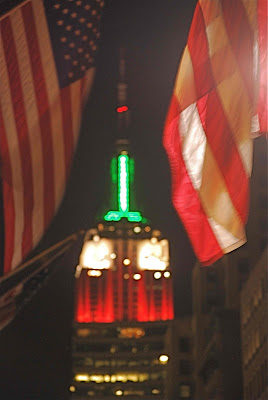 A view of the Empire State Building tower, in Red, White and Green in honor of today's observance of Columbus Day.
From History.com
The first recorded celebration honoring the discovery of America by Europeans took place on October 12, 1792 in New York City. The event, which celebrated the 300th anniversary of Columbus' landing in the New World, was organized by The Society of St. Tammany (also known as the Columbian Order).
San Francisco's Italian community held their first Columbus Day celebration in 1869. In 1892, President Benjamin Harrison urged citizens to participate in the the 400th anniversary celebration of Columbus' first voyage. It was during this event that the Pledge of Allegiance, written by Francis Bellamy, was recited publically for the first time.
Colorado was the first state to observe the holiday in 1905.
In 1937, President Roosevelt proclaimed October 12 as "Columbus Day" and in 1971, President Nixon declared the second Monday of October a national holiday.
Posted by Noel Y. C. at 4:12 PM