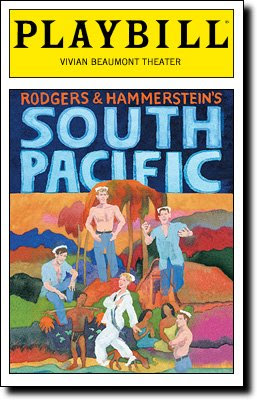 Youtube video of SOUTH PACIFIC at the 2008 TONY AWARDS from humbugfoto1
Last night, we attended a performance of the new revival of Rodgers and Hammerstein's SOUTH PACIFIC at Lincoln Center's Vivian Beaumont Theater. Winner of 7 Tony Awards including Best Revival of a Musical, this production stars Kelli O'Hara, Brazil native Paulo Szot, Andrew Samonsky and Loretta Ables Sayre who is of Filipino descent. Mr. Szot is this year's Tony Award winner for Best Performance by a Leading Actor in a musical. This revival is directed by Bartlett Sher. Highly recommended if you're into old-fashioned Broadway musical.
Reviews:
David Finkle:
"If it's taken almost 60 years for this first-ever Broadway revival, some show-biz wags have blamed the delay on how dated South Pacific supposedly was --and the off-kilter notion that Nellie Forbush's prejudices were a thing of the past. Not so. The musical -- coming during a presidential campaign where race is a heated issue -- now registers as indisputably relevant to the headlines. Listening to "You've Got to Be Carefully Taught" this month is like tuning in to a summary of Barack Obama's speech on how intolerance corrupts decent thought. The immediacy of the message is only one of a million reasons why the new South Pacific is a must-see-this-very-minute affair."
Ben Brantley, The New York Times:
"I know we’re not supposed to expect perfection in this imperfect world, but I’m darned if I can find one serious flaw in this production. (Yes, the second act remains weaker than the first, but Mr. Sher almost makes you forget that.) All of the supporting performances, including those of the ensemble, feel precisely individualized, right down to how they wear Catherine Zuber’s carefully researched period costumes.
Notice, by the way, how Mr. Sher implicitly underscores the theme of racism by quietly having the few African-American sailors in the company keep apart from the others. And the production never strains to evoke parallels between the then and now of the United States at war in an alien land.
Above all, though, what impresses about this “South Pacific” is how deeply, fallibly and poignantly human every character seems. Nearly 60 years ago Brooks Atkinson, writing in The New York Times, described the show as “a tenderly beautiful idyll of genuine people inexplicably tossed together in a strange corner of the world.”
I think a lot of us had forgotten that’s what “South Pacific” is really about. In making the past feel unconditionally present, this production restores a glorious gallery of genuine people who were only waiting to be resurrected."
Posted by Noel Y. C. at 3:47 AM