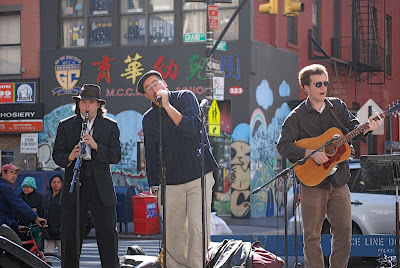 It was APPLE DAY and the GO GREEN launch on the Lower Eastside. I captured an image of these musicians on Orchard Street between Grand and Broome Streets. The event also featured apple tastings - Apple Pie to Chicken Apple Sausage to Chocolate Apple Truffles and Apples and Honey for Sukkot, Face painting and Family Activities for kids, Free giveaways! Toys, 500 Energy Efficient Light Bulbs, T-Shirts, and information on the best way to recycle, how to save energy and money, and the simplest things to do in your home to Go Green .
From Lower Eastside Improvement District website:
Once characterized by tenements and pushcarts, Orchard Street gained its flavor more than 200 years ago, as families squeezed into cramped buildings that filled lower Manhattan. Industrious immigrants became the Lower East Side's first business owners.   Selling their wares from potato sacks to thousands of local shoppers, successful business owners soon expanded their inventory and bought pushcarts - and eventually storefronts to make Orchard Street one of the busiest commercial districts in the world and the neighborhood a cultural mecca.
Over a century after hardworking immigrant families first crowded the tenements of Orchard Street, visitors from around the world are rediscovering the historic neighborhood and finding new surprises -- and all along absorbing the amazing history which characterizes the area.   Come explore the Historic Lower East Side. Like thousands of immigrants before you, you may never want to leave.
Posted by Noel Y. C. at 4:38 PM