Statues at the Met's Greek and Roman Galleries 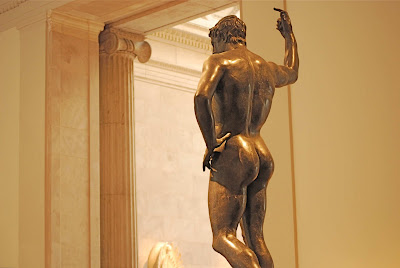 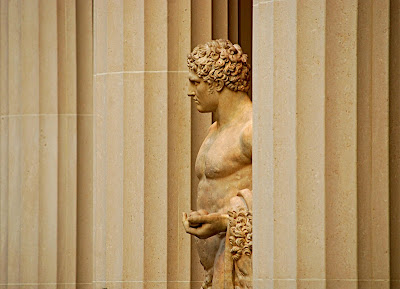 On a recent visit to the Metropolitan Museum of Art, I made these images of a statue of a nude male, and young Hercules at the Greek and Roman Galleries of the Metropolitan Museum of Art.
Description of Greek and Roman Art from the official website:
The Met's collection of Greek and Roman art contains more than 35,000 works dated through A.D. 312. The Greek and Roman collection dates back to the founding of the museum -- in fact, the museum's first accessioned object was a Roman sarcophagus, still currently on display. Though the collection naturally concentrates on items from ancient Greece and the Roman Empire, these historical regions represent a wide range of cultures and artistic styles, from classic Greek black-figure and red-figure vases to carved Roman tunic pins. Several highlights of the collection include the Euphronios krater depicting the death of Sarpedon (whose ownership has since been transferred to the Republic of Italy), the monumental Amathus sarcophagus, and a magnificently detailed Etruscan chariot known as the "Monteleone chariot". The collection also contains many pieces from far earlier than the Greek or Roman empires -- among the most remarkable are a collection of early Cycladic sculptures from the mid-third millennium BCE, many so abstract as to seem almost modern. The Greek and Roman galleries also contain several large classical wall paintings and reliefs from different periods, including an entire reconstructed bedroom from a noble villa in Boscoreale, excavated after its entombment by the eruption of Vesuvius in A.D. 79. In 2007, the Met's Greek and Roman galleries were expanded to approximately 60,000 square feet (6,000 m²), allowing the majority of the collection to be on permanent display.
Posted by Noel Y. C. at 4:51 AM