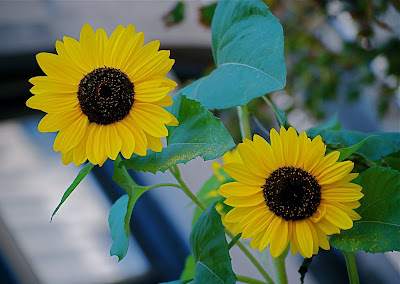 On a sunny and an unseasonably warm Sunday morning, I made this image of sunflowers in front of an apartment building on 75th Street off Columbus Avenue.
From wikipedia:
What is usually called the flower is actually a head (formally composite flower) of numerous florets (small flowers) crowded together. The outer florets are the sterile ray florets and can be yellow, maroon, orange, or other colors. The florets inside the circular head are called disc florets, which mature into what are traditionally called "sunflower seeds," but are actually the fruit (an achene) of the plant. The inedible husk is the wall of the fruit and the true seed lies within the kernel.
The florets within the sunflower's cluster are arranged in a spiraling pattern. Typically each floret is oriented toward the next by approximately the golden angle, producing a pattern of interconnecting spirals where the number of left spirals and the number of right spirals are successive Fibonacci numbers. Typically, there are 34 spirals in 1 direction and 55 in the other; on a very large sunflower you may see 89 in one direction and 144 in the other.
Sunflowers in the bud stage exhibit heliotropism. At sunrise, the faces of most sunflowers are turned towards the east. Over the course of the day, they follow the sun from east to west, while at night they return to an eastward orientation. This motion is performed by motor cells in the pulvinus, a flexible segment of the stem just below the bud. As the bud stage ends, the stem stiffens and the blooming stage is reached.
Sunflowers in the blooming stage are not heliotropic anymore. The stem has frozen, typically in an eastward orientation. The stem and leaves lose their green color.
Posted by Noel Y. C. at 4:38 AM

Email ThisBlogThis!Share to TwitterShare to FacebookShare to Pinterest
Labels: Sunflower