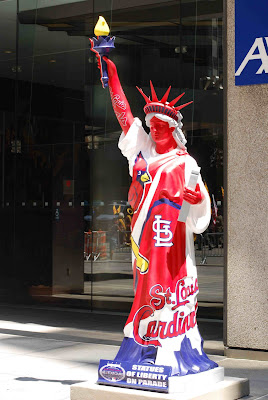 Happy Fourth of July! This is one of the Statues of Liberty spread across Manhattan to commemorate the final season of Yankee Stadium and Shea Stadium.
From the Major League Baseball website:
There will be 42 Statues of Liberty, each standing 8 1/2-feet tall, stationed around New York leading up to the July 15 All-Star Game there. These will start showing up on Friday at popular locations around the Big Apple, including Times Square, Carnegie Hall, Radio City Music Hall, the New York Stock Exchange and, yes, the Statue of Liberty.
Each one will be uniquely designed with bold graphics and colors featuring each of the 30 Major League Baseball clubs, the Brooklyn Dodgers, the New York Giants, the American League, the National League, four All-Star statues and statues commemorating the final season of Yankee Stadium and Shea Stadium, an additional version for the host Yankees, and one to be determined to be painted by the artist as a surprise.
Posted by Noel Y. C. at 3:40 AM No comments: 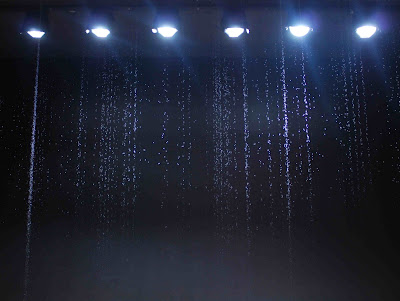 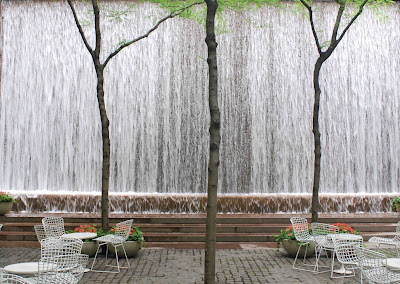 The top photo is another Olafur Eliasson creation now on exhibit at the Museum of Modern Art. It's called "Your strange certainty still kept." A curtain of water droplets, illuminated by strobe lights, appears frozen in midair. The art installation consists of water, strobe lights, acrylic, foil, wood, pump and hose. I took the photo below on a small "park" off Madison Avenue in midtown Manhattan.
Posted by Noel Y. C. at 3:23 AM No comments: 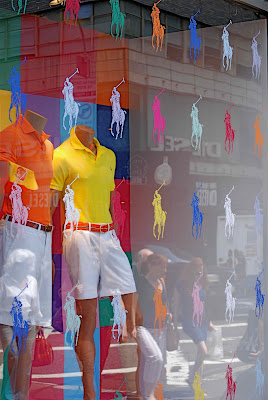 A summery window display for Ralph Lauren at Bloomingdales.
Posted by Noel Y. C. at 2:47 AM No comments: