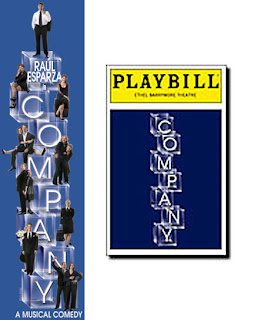 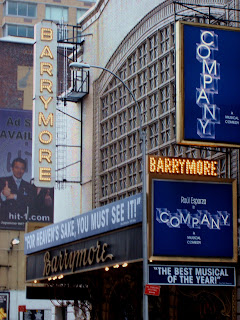 Earlier today at the Barrymore Theatre in Times Square (243 West 47th Street), I saw a matinee performance of COMPANY, a revival of the Broadway musical that was first staged in 1970. Directed by John Doyle, the show’s lyrics and music were penned by Tony Award winning songwriter Stephen Sondheim, and the book was written by George Furth. Even before the show started, I was a little bit disappointed when I opened my Playbill and saw a little notice saying that the lead role will be played by the understudy, and not Raul Esparza. The musical is plotless, but cleverly staged. It focuses on a New York bachelor who learns about the drama surrounding marriage, divorce, and dating from his married friends who threw him a surprise 35th birthday party. What is unique about this musical is that the actors not only sang and acted but also individually played different musical instruments, foregoing the usual orchestra pit, as in the last revival of another Sondheim musical, Sweeney Todd. The set was very minimal (which I sometimes hate, because I am a big fan of moving exquisite sets, dramatic lighting and big production numbers), and I almost got bored by the middle of the first act. Initially, I thought the perfromances were a little subdued and bland. However, I immensely enjoyed the musical numbers “Another Hundred People” and “Side by Side by Side.” I eventually got involved, excited and moved especially during the finale when Bradley Dean sang “Being Alive.” The last verse of the song goes…
Somebody crowd me with love
Somebody force me to care
Somebody make me come through
I'll always be there
As frightened as you to help us survive
Being alive, being alive,
Being alive, being alive.

Overall, I enjoyed this production and was amazed by the ensemble of talents who acted, sang and played musical instruments at the same time.

Although I sometimes I feel like an outsider when I am with married friends and family members, I am just grateful for being alive and free, side by side with people I care about.
Posted by Noel Y. C. at 7:32 PM No comments: