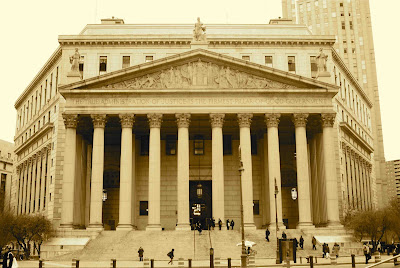 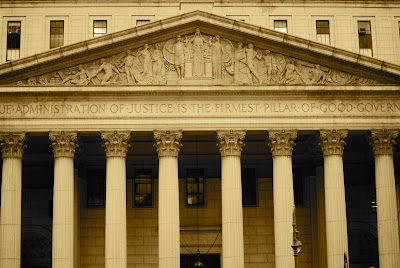 On my way to the courthouse to serve jury duty last Jan 24, I took photos of the main building of the New York County Supreme Court at 60 Centre Street across from Foley Square. The supreme court is located in several buildings in Manhattan: the main New York County Courthouse building at 60 Centre Street (photos above), and three others at 80 Centre Street (across Worth Street), 111 Centre Street, and 71 Thomas Street. The criminal branch is at 100 Centre Street, shared with the Manhattan Criminal Court, the Office of the District Attorney and other agencies, and at 111 Centre Street, shared with the New York County Civil Court. The Supreme Court in Kings County and in Richmond County are similarly housed in their respective counties. In Richmond County several "Parts" of the Supreme Court are located in the former U.S. Navy Home Port (each Part is usually where one Supreme Court judge sits).
The building houses the Supreme Court and the Office of the County Clerk. It was designed by the well-known Boston architect Guy Lowell who won a competition in 1913 with a design for a round building. The design was altered to a hexagonal form. The Roman classical style chosen was popular for courthouse architecture in the first decades of the 20th century. Lowell also designed the Boston Museum of Fine Arts and the building plan for Philips Academy at Andover, Massachusetts. He was also a landscape architect and designed formal gardens for Andrew Carnegie and J. Pierpont Morgan in New York. The courthouse rises above a 100-foot wide flight of steps to an imposing colonnade of 10 granite fluted Corinthian columns. Above the columns are engraved words of George Washington: "The true administration of justice is the firmest pillar of good government." Above this is a triangular pediment, 140-feet long, with 14 classical figures in high relief. Along the huge roofline are three statues representing Law, Truth and Equity. All of the pediment sculpture was carved by Frederick Warren Allen.
Posted by Noel Y. C. at 6:17 PM 1 comment:

The NEW MUSEUM of CONTEMPORARY ART 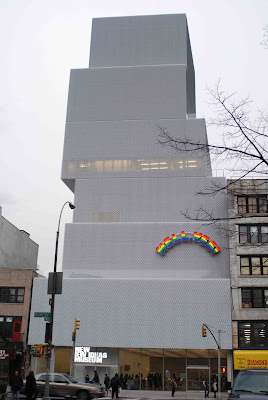 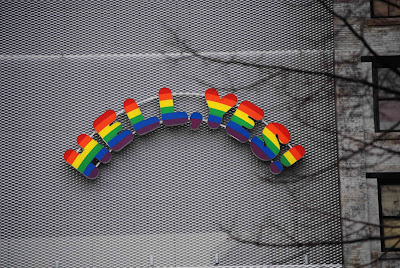 The NEW MUSEUM of CONTEMPORARY ART opened to the public last month. We recently visited this museum located at 235 Bowery between Stanton and Rivington Streets, at the origin of Prince Street. This is the first art museum ever constructed from the ground up in downtown Manhattan. From a distance, the New Museum looks like a haphazard pile of welded boxes on the Lower East Side. The seven-story structure was designed by Tokyo-based architects Kazuyo Sejima and Ryue Nishizawa/SANAA with Gensler, New York, serving as Executive Architect."Sexy and defiant in this see-through armature, the museum challenges passersby to call it a freak, thereby earning a spot as a genuine New York institution." The museum houses contemporary art, and serves as a "incubator for new ideas."
On exhibit from December 1, 2007 through March 23 is UNMONUMENTAL: AN EXHIBITION IN FOUR PARTS. It features 21st century sculpture by 30 international artists, and morphs as layers of collage, sound and internet-based art.
Posted by Noel Y. C. at 5:37 PM No comments: 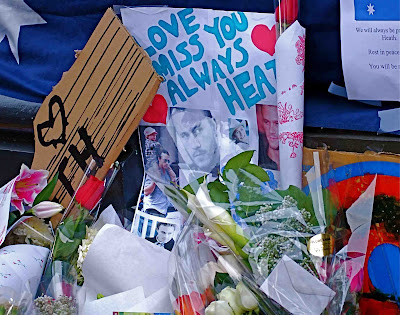 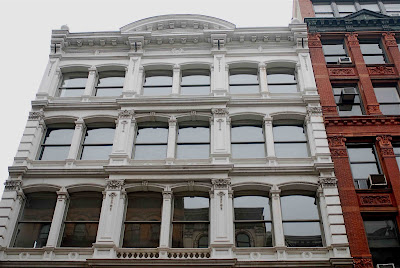 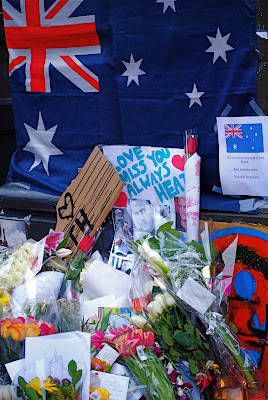 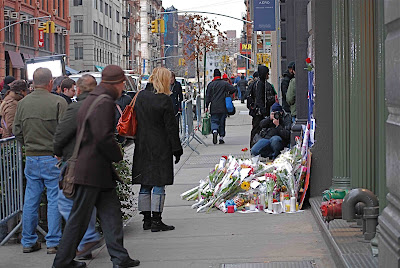 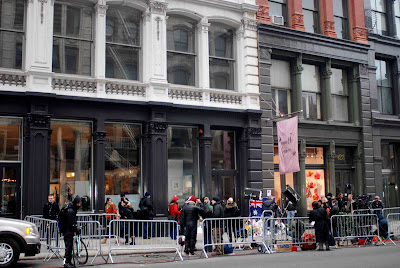 Youtube from HeathLedgerTribute
On January 22, 2008, the brilliant Australian born actor HEATHCLIFF ANDREW LEDGER was found dead in his fourth-floor apartment at Broome Street in the SoHo neighborhood of Manhattan. He was 28. Above are photos of his apartment building and the makeshift memorial put together by mourning friends and fans of the actor at the entrance of the building. I made these images two days after Mr. Ledger's passing. Mr. Ledger had become a familiar and well-liked figure in the SoHo neighborhood since moving there after he broke up with the actress MICHELLE WILLIAMS, who played his wife in “Brokeback Mountain.” Ms. Williams is the mother of Heath's daughter.
Born on April 4, 1979, Mr. Ledger was an Academy Award-nominated actor. After appearing in television roles during the 1990s, he developed a Hollywood career. He starred in both critical and financial successes, including "Ten Things I Hate About You, The Patriot, Monster's Ball, A Knight's Tale" and "Brokeback Mountain." He has also completed the role of the Joker in the forthcoming "The Dark Knight," the latest chapter in the Batman saga.
Heath Ledger will always be remembered as an enormously talented actor and an exceptional person.
Posted by Noel Y. C. at 3:28 PM No comments:

The APPLE STORE on FIFTH AVENUE 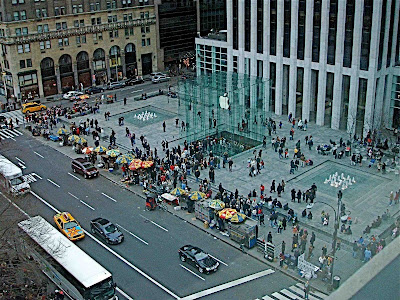 View of the APPLE FLAGSHIP store on Fifth Avenue from BERGDORF GOODMAN
Posted by Noel Y. C. at 7:58 PM 2 comments: 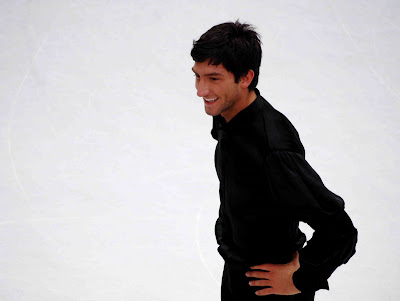 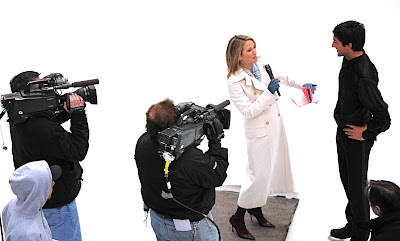 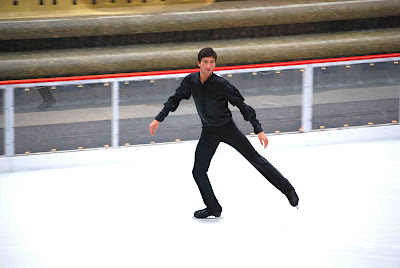 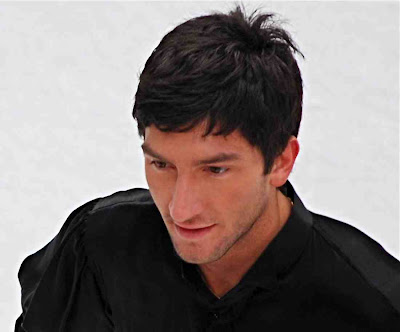 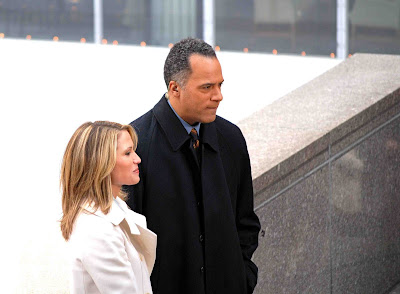 American figure skater EVAN LYSACEK performed at the Rockefeller Skating Rink yesterday, January 11 for the WEEKEND TODAY SHOW. Lysacek is the 2007 US National Champion, 2008 Grand Prix Final bronze medalist, and a two-time World bronze medalist (2005–2006). Lysacek is currently ranked fourth in the world. He was the United States Olympic Committee's Male Athlete of the Month for November 2006.
Weekend Today show is hosted by LESTER HOLT and AMY ROBACH. The weekend broadcasts continue the "Today" tradition of covering breaking news, interviewing newsmakers, reporting on a variety of popular-culture and human-interest stories, covering health and finance issues and presenting the latest weather reports. In addition, the show offers visitors to New York City a chance to observe firsthand the workings of a live television broadcast with its windowed studio on Rockefeller Plaza. Interaction with the crowd outside the studio is a major part of the program.
Weekend editions are tailored to the priorities and interests of weekend viewers—offering special series such as "Saturday Today on the Plaza," featuring live performances by the biggest names in music, and dance and theater from famed New York City shows outside the studio every weekend throughout the summer.
Lester Holt is also an anchor for the flagship broadcast "NBC Nightly News." In addition, Holt serves as fill-in anchor and correspondent for "NBC Nightly News with Brian Williams" and the weekday "Today" program. He also contributes to MSNBC, NBC’s 24-hour cable news network. Holt has reported from many of the world's hot spots. In 2006, he reported from the front lines in Lebanon on the war between Israel and Hezbollah and from London, he reported on the terror threat to U.S. bound-airliners from the UK. In 2005, Holt was on the ground for Hurricane Katrina covering events both in Louisiana and Mississippi, and later that fall covered Hurricane Rita in Texas.
Posted by Noel Y. C. at 2:32 PM 2 comments:

KUBRADOR (THE BET COLLECTOR) at the MOMA Global Lens 2008


The Global Film Inititative presented the Filipino movie called KUBRADOR (THE BET COLLECTOR) at the Museum of Modern Art last Thursday night as part of the GLOBAL LENS film series. In attendance during the screening were the director JEFF JETURIAN and cast and crew led by actress GINA PARENO.

The story revolves around Amy, the family matriarch who makes ends meet by running a small convenience store out of her house in the slums of Manila. She is forced to supplement the family income by collecting bets for an illegal numbers game called "jueteng." The film is starkly realistic narrative that portrays a once-proud woman, haunted by memories of a dead son and hounded by the police, and her fragile and lonely life as a bet collector on the streets. Gina Pareno's portrayal is very effective.

I hope the next Filipino movie featured in a New York film festival is not set in the slums of Manila for a change.
Posted by Noel Y. C. at 11:01 AM No comments: 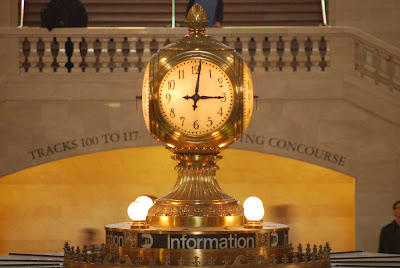 The ultimate meeting place in New York is Grand Central's Information Booth at the center of the concourse. At the top of this booth is one of the most recognizable icons of Grand Central, the four-faced clock. Each of the four clock faces are made from opal. Both Sotheby's and Christie's have estimated the value to be between US$10 million and US$20 million.
Posted by Noel Y. C. at 4:31 AM No comments: 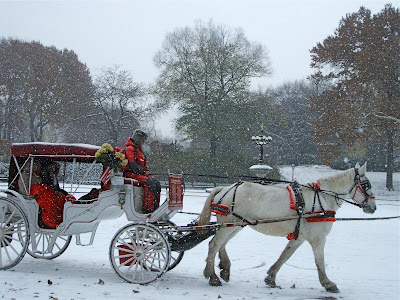 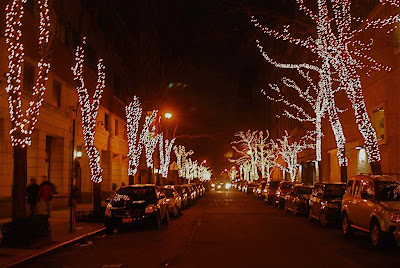 On my way to a friend's house to celebrate the New Year, I passed by this beautiful street on the Upper Westside. This is 67th Street between Central Park West and Columbus Avenue. On the right side is the ABC television network and on the left are residential buildings as well as the restaurant called Cafe Des Artistes.
Posted by Noel Y. C. at 6:02 PM 1 comment: