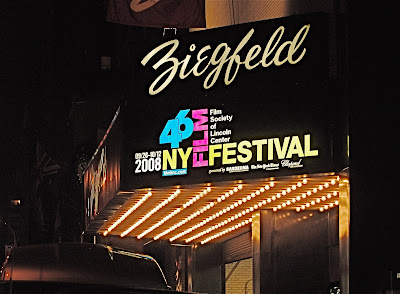 Youtube video from benpadero
Earlier this evening we attended a screening of a Philippine movie titled "SERBIS" (Service) at the Ziegfeld Theater. The movie is part of the 46th New York Film Festival that opened last September 26. The festival presented both newcomers and acclaimed filmmakers, Hollywood features and independent visions from all over the globe. Clint Eastwood’s highly anticipated "Changeling" is this year's NYFF centerpiece.
Filipino veteran actress GINA PARENO stars in "SERBIS" under the direction of BRILLANTE MENDOZA. Not to diminish the artistic merit of the movie and its actors, this work though leaves me feeling tired of films depicting the social ills and poverty in the Philippines that are invited to be part of international film festivals.
Synopsis:
A drama that follows the travails of the Pineda family in the Filipino city of Angeles. Bigamy, unwanted pregnancy, possible incest and bothersome skin irritations are all part of their daily challenges, but the real "star" of the show is an enormous, dilapidated movie theater that doubles as family business and living space. At one time a prestige establishment, the theater now runs porn double bills and serves as a meeting ground for hustlers of every conceivable persuasion. The film captures the sordid, fetid atmosphere, interweaving various family subplots with the comings and goings of customers, thieves and even a runaway goat while enveloping the viewer in a maelstrom of sound, noise and continuous motion.
Director’s statement:
This story is closely based on real life, hence the treatment of the material will be in the cinema verite style, like my other films Slingshot (2007), Foster Child(2007) and The Masseur (2005). The events unfold as they happen in real life, seen from the various points of view of the characters involved: Nanay Flor, the proprietor of the movie house; her daughter who takes over the movie house while she is away; the various trade boys and hustlers and even the purse snatcher who seeks refuge in the movie house from pursuing policemen. There is an irony implicit in our lives. What is deemed immoral by the law is mostly lived and practiced freely by normal people, hence immorality has become a way of life as dictated or demanded by our need to survive.
Posted by Noel Y. C. at 8:07 PM