Royal Porcelain from the Twinight Collection 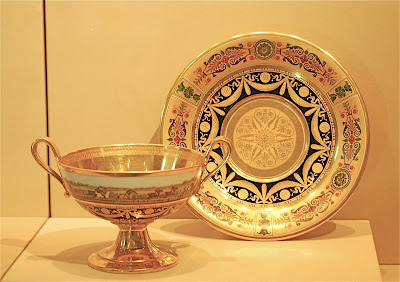 On exhibit at the Metropolitan Museum of Art is "Royal Porcelain from the Twinight Collection, 1800-1850." Two of the porcelain pieces are shown in the image that I made on a recent visit to the Met.
Two-Handled Cup and Stand Depicting a Horse Race
Sèvres factory, France, 1811
Hard-paste porcelain; Cup: H. 4 7/8 in. (12.4 cm); Stand: Diam. 8 3/4 in. (22.2 cm)
Decoration by Jacques-François Swebach and Pierre Huard
Twinight Collection
The band that encircles the upper section of the cup depicts a horse race at the Champs de Mars in Paris as well as the arriving spectators and preparations for the race. The cup and stand were presented to the Comtesse de Montalivet, a lady-in-waiting to Empress Marie-Louise, as a New Year's gift in 1812. While small in scale, the cup and its stand have been given the qualities of a presentation trophy through the richness of the decoration and the commemoration of a specific event.
The porcelain factories of Berlin, Sèvres, and Vienna achieved an extraordinary level of both artistic and technical skill in the first half of the nineteenth century, and the quality of painted decoration practiced at these three factories at that time has never been surpassed. This exhibition will bring together approximately seventy-five extraordinary examples from these three European porcelain manufactories and will illustrate the exchange of ideas and styles between the factories that resulted in some of the most remarkable porcelain ever produced.
Posted by Noel Y. C. at 4:17 AM