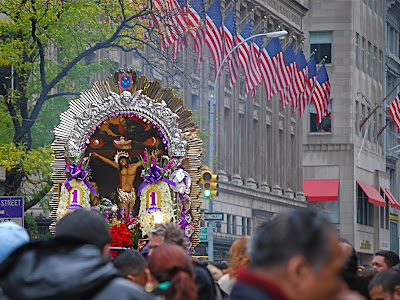 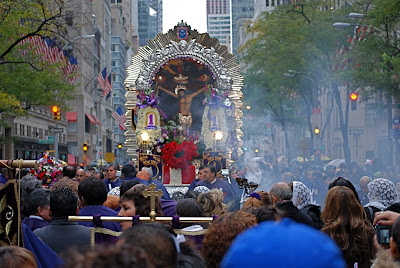 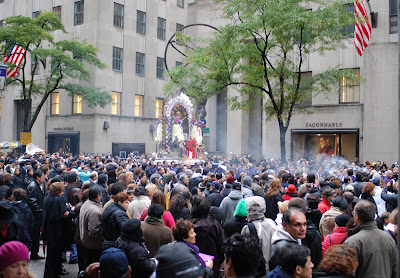 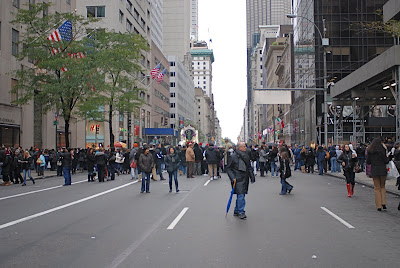 New York City has always been a "melting pot" and the presence of multi-ethnic society is evident in the streets of the city. Last Sunday, October 19, we came across the annual Peruvian religious procession in honor of the “Lord of the Miracles” (El Senor de los Milagros) on Fifth Avenue. I captured these images in front of St. Patrick's Cathedral.
From Perutravels
Lord of Miracles Festival (October 18-28)
This procession, which gathers together the largest number of believers in South America, dates back to colonial times, when a slave, brought over from Angola, drew the image of a black Christ on the walls of a wretched hut in the plantation of Pachacamilla, near Lima. The image stayed on the wall despite several attempts to erase it.    As a result of this event, worship of the image rose to new heights, until it became what is today the most widely venerated image in the city of Lima. The heart of the celebration is one of the largest processions to take place every year in the Americas, where tens of thousands of the faithful dress in purple tunics, singing hymns and praying as they accompany the image.    The litter which bears the painting weighs two tons and is borne on the shoulders of believers who set out on the traditional 24-hour procession from the church of Las Nazarenas, crossing downtown Lima until it reaches the church of La Merced in Barrios Altos. Around this time of year, the streets fill with vendors of a wide variety of typical dishes and sweets, such as the famous Turrón de Doña Pepa.    In October to commemorate the Lord of Miracles (Señor de los Milagros), Lima hosts the well-known bullfight season which carries the same name and is held in the centuries-old Plaza de Acho bullring. The season features some major bullfighters (toreros) from Spain and Latin America.
Posted by Noel Y. C. at 9:54 AM