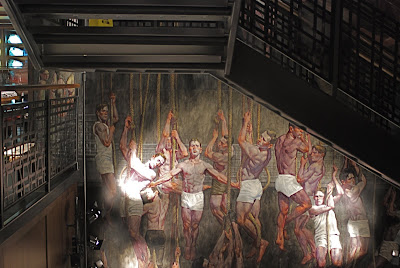 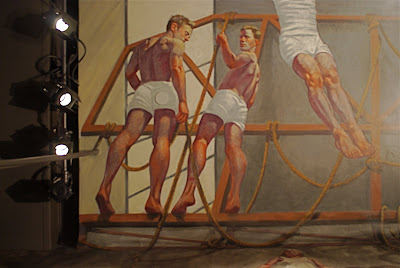 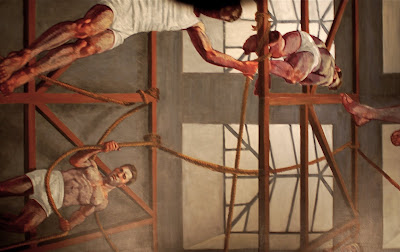 The mural of artist MARK BEARD is the centerpiece of the interior of the Abercrombie and Fitch Flagship Store on Fifth Avenue. Above are some portions of the artwork on the wall and ceiling of the popular store. Mr. Beard is a New York City based American artist.
Mark Beard, born in 1956 in Salt Lake city, now lives in New York, His works are in museum collections, including the Boston Museum of Fine Arts and the Atheneum; the Whitney, Metropolitan Museum of Art and the Museum of Modern Art, New York; Princeton, Harvard, and Yale Universities; Graphische Sammlung, Munich, and others worldwide, as well as more than 100 private collections. A visit to Mark’s studio is like discovering Michelangelo’s lair: oil paintings layer the walls, lifedrawings litter the table at the feet of heroic bronzes; ceramics, architectural maquettes are everywhere; virtuosity, in every medium. And then it gets even more interesting.  Mark’s talent is so overflowing that, years ago, he needed to channel himself into alter egos. Mark invented the persona of “Bruce Sargeant,” an imagined English artist, contemporary of E. M. Forster, Rupert Brooke, and John Sloan. Mark also created Bruce Sargeant’s teacher, Hippolyte-Alexandre Michallon, a 19th-century French Academist. Michallon also taught Edith Thayer Cromwell, an American avant-gardeist; and Brechtolt Steeruwitz, the German Expressionist, a most complex personality. The style of each of these artists is individual, brilliant and true.  Mark Beard is unprecedented, but not singular. Accomplished in every medium, he is more than a complete artist—he is at least five. (A sixth is now emerging as well.)
Posted by Noel Y. C. at 4:30 PM