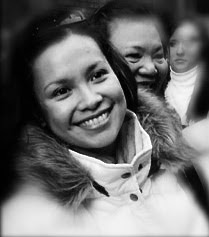 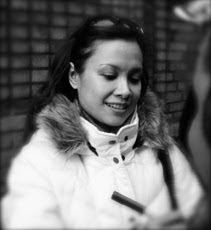 Lea Salonga greeting fans and signing autographs at the Broadhurst Theatre
stagedoor on March 11, 2007. In her last Broadway appearance, she played the
role of Fantine in the revival of Les Miserables.
Tony Award winning artist LEA SALONGA will appear in a special performance for the victims of Typhoon "Ondoy" to be held at the Philippine Center's Kalayaan Hall located at 556 Fifth Avenue (between 45th and 46th Streets) in New York City on Monday, October 12 at 7:00 PM. The event is called "Lea Salonga Sings in New York for Typhoon Ondoy Victims." Ms. Salonga has always been an inspiration to many, not only for her enormous talent, but also for her love and dedication to her country. The typhoon, which struck the Philippines on September 26 led to the worst flooding disaster in the country in over 40 years. It has displaced over 450,000 people and left 380,000 living in makeshift shelters. There are more than 200 known to have died due to the severe flooding that affected most of the Metropolitan Manila area and nearby provinces. After several days, another typhoon followed that affected parts of northern Luzon.

To purchase tickets for the event, please go to: http://leasalongaondoybenefit.eventbrite.com
Donations are encouraged even if you are unable to attend this benefit event. Please go to http://www.af-usa.org. Go to “Donate Now” and select "AF-USA Typhoon Relief Fund." You may also send your check to payable to Ayala Foundation USA at 255 Shoreline Drive, Suite 428, Redwood City, CA 94065. Please put "flood victims" on the memo portion of your check.

Lea Salonga is a singer and actress from the Philippines who is best known for her role in the musical, Miss Saigon. In the field of musical theatre, she is recognized for having won the Olivier, Tony, Drama Desk, Outer Critics, and Theatre World Awards for Miss Saigon, the first to win various international awards for a single role. She was also the first Asian to play Eponine in the musical Les Misérables on Broadway. Salonga is the singing voice of Princess Jasmine from Aladdin in 1992 and Fa Mulan for Mulan and Mulan II in 1998 and in 2004, respectively.

The Ayala Foundation USA (www.af-usa.org) is a public charity registered as a 501© 3 tax-exempt organization. As the bridge between US-based Filipino individuals and communities, and Philippine-based social development institutions, AF-USA becomes a mechanism by which donations and other forms of support can reach intended beneficiaries in the Philippines. Ayala Foundation USA is coordinating with Ayala Foundation, Inc and other groups conducting major relief efforts. The donations you send will be brought to areas where the need is greatest and areas that have not yet been reached by groups doing disaster relief mobilization.

Tickets for venues above are available at Ticketmaster.