Corner of 7th Avenue and 11th Street in the West Village: Tiles for America 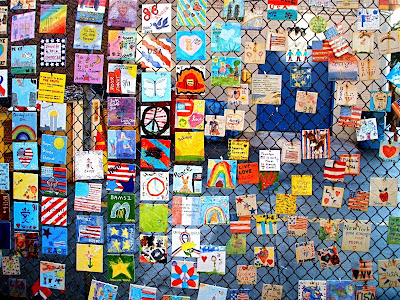 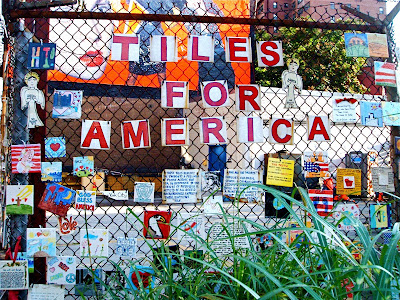 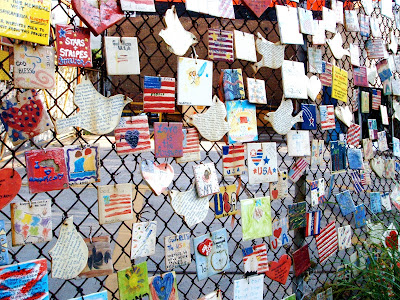 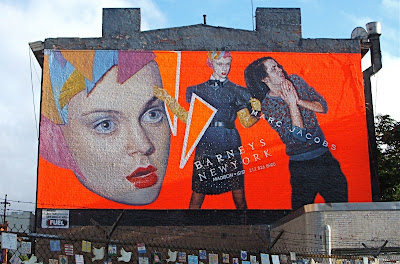 Located in the West Village, at the corner of 7th Avenue and 11th Street is a fence that became the site of TILES FOR AMERICA. Tiles for America began on September 12, 2001. In the aftermath of the tragedy, crowds gathered in large numbers in front of Saint Vincent's Hospital, located at the corner of 7th Avenue and 11th Street. This was the hospital that was prepared to receive the thousands of survivors that many people were hopeful they would be. Lorrie Veasey, owner of OUR NAME IS MUD, also located on 11th Street, began to create what she hoped would be an inspiration to recovering victims. From raw clay she fashioned approximately 5000 small angels and American flags, which she and friends attached to a fence that faced the hospital on September 14. The angels and flags were attached with ribbon, and before two weeks had passed, most of them had been removed from the fence.
Lorrie is a member of an organization called the Contemporary Ceramic Studio Association. They have a web site with a bulletin board where "Paint Your Own Pottery" studios correspond with one another. Studios across the USA were understandably horrified at the events of 9/11 and eager to find a way to help. The idea of a tile memorial took hold, and soon studios all across the USA held individual fundraisers in which tiles were created for the NY Memorial. Soon, case upon case of tiles began to arrive. Studio owners often drove through the night to bring their tiles to the site (such as Patti Bowman from Glazenfyre in Virginia Beach VA-who drove up with 1500 tiles), and many studio owners worked in freezing weather to install them, (Most notably Deb from Garden City Doin the Dishes and Meredith from Art and Soul). What was once a small section of fence has grown to encompass more than a full city block. Approximately 6000 tiles now hang on the Memorial. Most CCSA studios have participated in some way, and tiles have also been received from Europe and Japan. Word has also spread through the clay community, and the Memorial has received several hand made unusual tiles from prominant ceramic artists.(information from the Tiles for America website). When I visited this part of the West Village, I also took a picture of the colorful fashion advertisement just above the memorial tiles.
Posted by Noel Y. C. at 11:29 AM