Marble Head of a Greek General and other Marble Heads 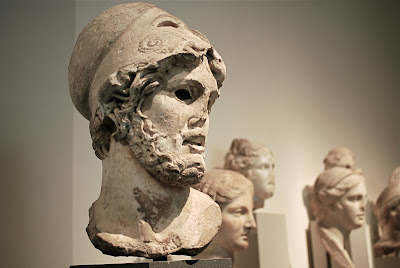 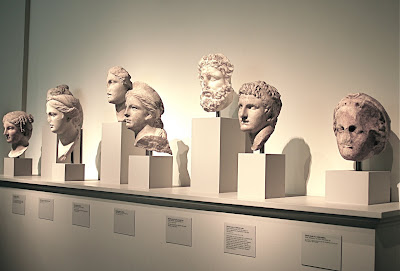 The photo on top is that of a marble head of a Greek General, a copy of a Greek bronze statue of the mid-4th century, B.C., on exhibit at the Metropolitan Museum of Art's Greek and Roman Galleries. This powerful portrayal of a man of action belongs to a type popular in Roman times. One suggestion for his identity is the strategos (general) Phokion, pupil of Plato and one of the foremost Athenian statesmen of the fourth century B.C., but there is little evidence to support that theory. The sculptures at the bottom are marble head, which are head portraits of real individuals from the same period. I made these images during my visit to the Metropolitan Museum earlier this afternoon to view the exhibit of the Vermeer paintings.
Posted by Noel Y. C. at 2:57 PM

Email ThisBlogThis!Share to TwitterShare to FacebookShare to Pinterest
Labels: marble head of a Greek General, Metropolitan Museum of Art