Night at the Guggenheim Museum: KANDINSKY 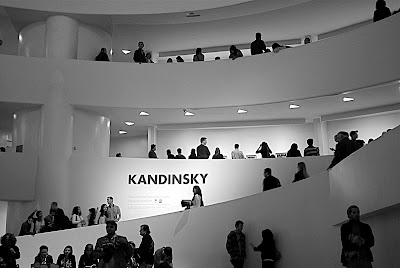 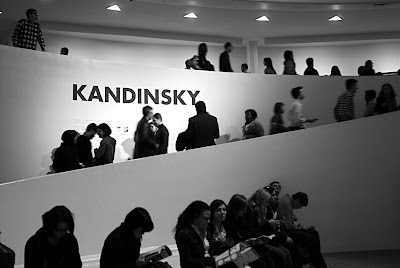 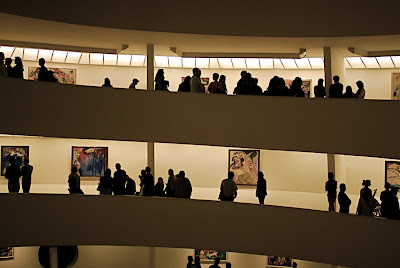 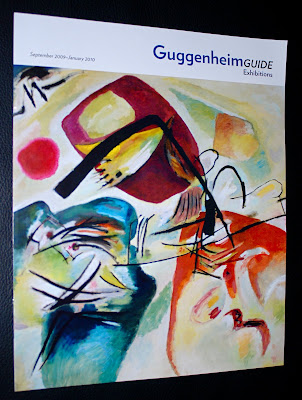 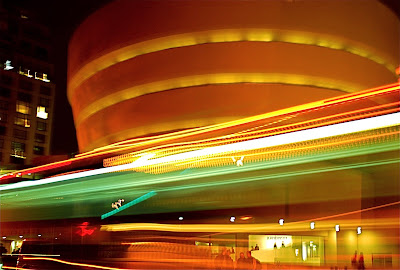 Last Saturday night, I visited the Guggenheim Museum for the KANDINSKY exhibit, a full-scale retrospective of the visionary artist, theorist, abstraction pioneer, and seminal figure in the history of the museum. Saturday is "pay-what-you-wish day from 5:45-7:45 PM (normally $18) at the Guggenheim Museum which is located at 1071 Fifth Avenue (at 89th Street). The Kandinsky exhibit will be presented through January 13, 2010.

This exhibition is organized by the Solomon R. Guggenheim Foundation, New York, in cooperation with the Städtische Galerie im Lenbachhaus und Kunstbau, Munich, and the Centre Pompidou, Paris. This retrospective will bring together more than 100 paintings drawn primarily from these three institutions, whose collections comprise the three largest repositories of Kandinsky in the world, as well as from significant private and public collections.

The exhibition will offer a comprehensive chronological survey of Kandinsky’s work through a selection of his most important canvases, including examples from his series ofImprovisations, Impressions and Compositions, while investigating his formal and conceptual contributions to the course of abstraction in the twentieth-century. The unprecedented collaborative efforts of the Guggenheim, Pompidou, and Lenbachhaus will assemble works that have rarely traveled together, such as Munich’s early masterpiece, A Colorful Life (1907), or the Guggenheim’s Light Picture (1913) - a seminal work among the first of Kandinsky’s truly abstract canvases which has not even been exhibited in the museum’s own galleries since the 1970s - offering new contexts and comparisons for those works that have been held apart.

Under the care and preparation of the Guggenheim’s conservation department, four canvases considered extremely delicate due to the artist’s use of sand mixed into his painting medium, will travel for the first time in decades. Significant loans to be confirmed from Russian institutions such as Nizhni Novgorod State Museum, the Pushkin Museum of Fine Arts and the State Tretyakov Gallery will introduce works little seen in the United States. The survey will trace Kandinsky’s vision through thematic motifs, such as the horse and rider, mountainous landscapes and tumultuous seascapes, apocalyptic imagery and other religious subjects, and follow the artist’s painted realizations of his well-developed aesthetic theories, allowing a re-examination of the geographical- and time-based periods traditionally applied to his oeuvre.

Vasily Kandinsky and Solomon Guggenheim
Vasily Kandinsky was a central figure in the history and genesis of the Solomon R. Guggenheim Museum, and this landmark exhibition will fittingly coincide with the museum’s 50th anniversary year. The museum’s founder, Solomon R. Guggenheim, started acquiring works by Kandinsky in 1929 upon the counsel of Hilla Rebay, who was to become the museum’s first director and advocated collecting all periods and media of Kandinsky’s oeuvre. Guggenheim paid an historic visit to the artist’s studio at the Bauhaus in Dessau, Germany in 1930, ultimately purchasing more than 150 Kandinsky paintings. Guggenheim soon became the champion of a particular brand of abstraction, known as nonobjective art, which had no ties to the empirical world and aspired to spiritual and utopian goals; his enthusiasm eventually leading to the opening the “Museum of Non-Objective Painting” in 1939, now known as the Solomon R. Guggenheim Museum. Permanent galleries were devoted to Kandinsky from the museum’s inception, a practice the Guggenheim has revived in recent years. In 1945, shortly after the artist’s death in Paris, Rebay organized a memorial exhibition at the Museum and translated some of his most influential writings into English.
About Kandinsky
Vasily Kandinsky (b. 1866, Moscow – d. 1944, Paris) was one of the pioneers of abstraction and great theorists of Modernism. His seminal pre-World War I treatise, Concerning the Spiritual in Art, published in Munich in 1911 lays out his program for the development of art independent of observations of the objective world. Interested in synesthesia, and more particularly in the relationship between painting and music, Kandinsky strove to give painting the freedom from nature he felt in music. Kandinsky’s discovery of a new subject matter based only on the artist’s “inner need” would occupy him throughout his life.
Posted by Noel Y. C. at 5:14 AM

I was there, too!