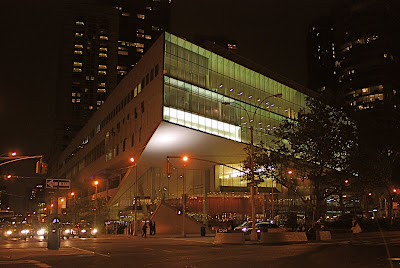 Alice Tully Hall, located at the northwest corner of 65th Street and Broadway 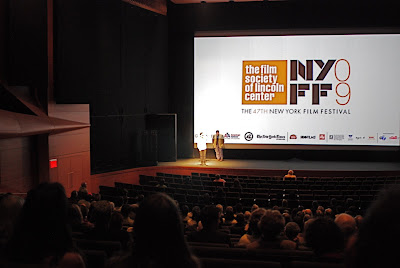 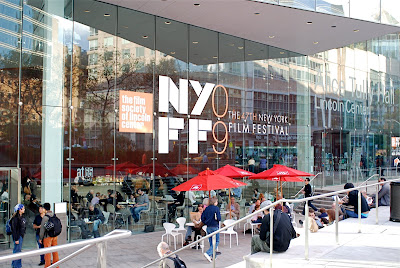 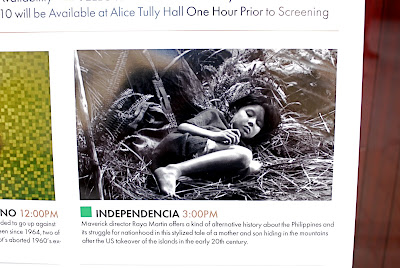 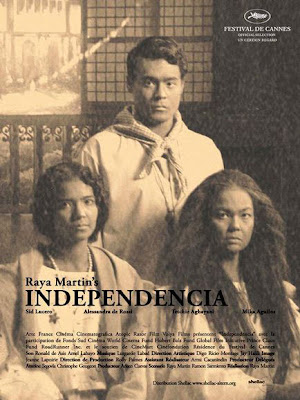 Official poster of the movie
video posted by cinephile1
Last Sunday, I attended the screening of a Filipino movie called INDEPENDENCIA at the New Yrok Film Festival at Lincoln Center's Alice Tully Hall. Directed by Raya Martin, Independencia is a "77-minute masterpiece that employs newsreels and early 20th century studio films with false backdrops to show the destructive effects of the American colonization.” Martin offers an alternative history about the Philippines' prolonged national struggle, imagining it as a black and white, studio shot primitive talkie. A century ago, an aging mother and son flee the new American occupiers, taking refuge in the depths of the forest. Chaos however follows them. The movie features Sid Lucero, Tetchie Agbayani and Alessandra de Rossi (film synopsis from the NYFF Playbill program).

Review by Andrew Schenker (thelmagazine.com):
Although it occasionally gets carried away by its own reflexive spirit, Independencia is far more than the cute formal exercise its premise suggests. As he spins his myth-like tale of three generations of Filipino villagers hiding out in the forest from the threat of occupying Yankees, director Raya Martin fits his colonialist story with a colonized aesthetic to match. Understanding the ways in which cultural imperialism is often grounded in the cinematic image—a point he perhaps stresses too hard through a mid-film mock-propaganda newsreel—he steeps the picture in the look of early Hollywood silents, an appropriate framework through which to process the experience of the colonized Filipinos who were likely exposed to these very movies. But for all the studied artificiality of the film’s look—the use of the 4:3 frame, matted backgrounds, a subtle flicker effect—Martin’s images can’t be reduced to mere model-mimicry. Simply put, they’re too lovely: oozy, silvery glimpses of trees, bodies, faces that look like something, not so much ripped from the studio era, but out of some hazy dreamscape instead.

Unfolding sometime in the early part of the 20th century, the film begins with a mother and son fleeing the danger of the city for the relative seclusion of a tropical forest. They're joined by a battered woman seeking asylum, and the three live in relative peace in a makeshift shack until the mother succumbs to illness. Then, after a few scratches on the screen and a few frames of white leader mimic a reel change, we jump a couple years ahead, with the son and woman living in the same forest, now married and raising a child of their own. Throughout it all is the constant threat of the Americans, their presence never overstated, but always felt. When they finally do arrive, they seem like a foreign conception of U.S. soldiers: their voices sound like Filipinos trying to speak American English and their actions are uniformly brutish. It’s as if they were called into being by the cinematic imagination of the oppressed. And, in a way, they are, since it’s Martin, reflecting on his country’s legacy, who has created them.

Ultimately, Independencia doesn’t really take us deep into the workings of the colonial situation—after registering its initial insight about cultural hegemony and the film image, it’s content to simply present the Americans as the enemy. Instead it proceeds by a certain strain of mythologizing, seemingly drawn from oral tradition—we see the father pass it on to his son—which imagines the struggle in terms of allegorical figures like “the man in the river” and “the evil army” while the villains are kept largely off-screen. When an actual threat finally emerges, it’s preceded by an earth-rending thunderstorm which, in its monumentality, seems like the real enemy—and whose presentation, with its images of figures curled up against the rain and its claps of thunder, wind and swirling strings on the soundtrack, represents the film’s aesthetic peak—rather than the soldiers whose brief presence immediately follows the storm. In moments likes this, Martin succeeds in conjuring up a smoky dreamworld—which we recognize at last as the world of the movies—and then, summoning the weight of history, tears a rude hole through its gauzy fabric.
Posted by Noel Y. C. at 1:57 PM