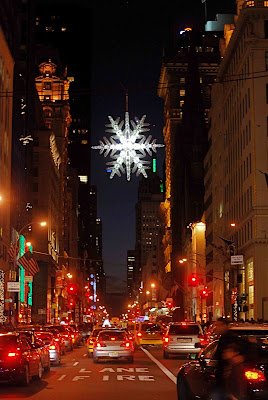 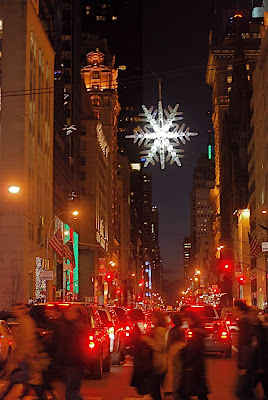 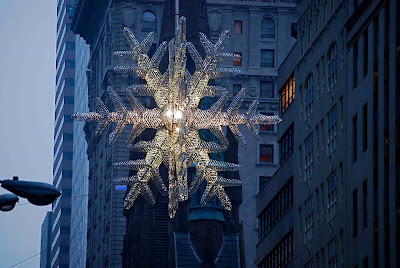 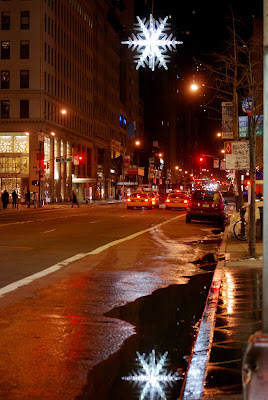 Each winter before Christmas, a giant snowflake of lights appears above the intersection at Fifth Avenue and 57th Street. First introduced in 1984, the snowflake was named the "UNICEF Snowflake" in 2002 to help raise money for that organization.
From http://www.unicefusa.org:
The UNICEF Snowflake: A beacon of hope for the holidays
The UNICEF Snowflake is a dazzling, illuminated crystal ornament that graces the intersection of Fifth Avenue and 57th Street in New York City each holiday season as a beacon of hope, peace and compassion for vulnerable children around the world.
More than a symbol, the UNICEF Snowflake is the centerpiece of an ambitious campaign to raise millions of dollars in support of health, immunization, nutrition, clean water and sanitation, education and protection for children in developing nations.
A mid-Manhattan seasonal attraction for 20 years, the Snowflake was dedicated to UNICEF by the Stonbely Family Foundation in 2002. Last year, acclaimed lighting designer Ingo Maurer and the French-based luxury goods company Baccarat unveiled a new UNICEF Crystal Snowflake, the world's largest outdoor crystal chandelier of its kind.
Posted by Noel Y. C. at 4:38 AM