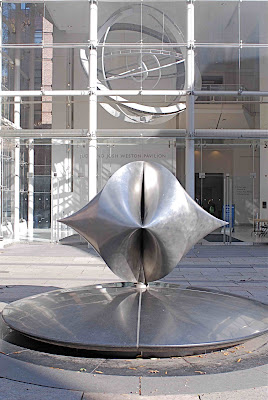 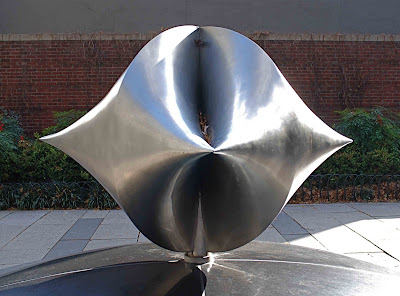 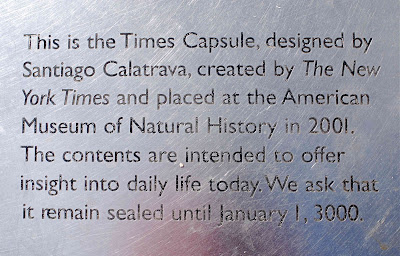 When I visited the American Museum of Natural History recently, I took photos of the NEW YORK TIMES CAPSULE installed in front of the Weston Pavilion. The capsule was designed by Spain's well-known architect and sculptor, SANTIAGO CALATRAVA.
From the New York Times:
Last spring, the editors of The New York Times Magazine launched an international competition to design a time capsule. Participants received a simple set of guidelines: devise a means of preserving information until A.D. 3000 that takes the concept of a time capsule in new directions. In the end, almost 50 designers, architects, and engineers from 15 countries submitted entries that ranged from the practical to the whimsical, and a jury of Times editors and critics winnowed the entries to a select group. Capturing Time: The New York Times Capsule includes samples of the contents of the Times Capsule; some of the nearly 50 design proposals received in the competition to create the Times Capsule; and a more than 500-year-old Aztec artifact from the Museum's collection that evokes the Aztecs' conception of time. The exhibition also examines concepts of time such as biological time, cosmological time, and cultural time.
The exhibition was designed and executed by the American Museum of Natural History's Department of Exhibition, under the direction of David Harvey, vice president for Exhibition; key exhibition and design services were provided by Gerhard Schlanzky, Eric Janssen, Jayne Hertko, Lauri Halderman, Robert Vinci, Nancy Falkin, Frank Rasor, Deborah Barral and Steve Warsavage.
The design proposed by Spain's foremost architect won the approval of the panel of judges comprised of editors and writers at The New York Times Magazine including Herbert Muschamp, Michael Kimmelman, Roberta Smith, Stephen Mihm, Jack Rosenthal, David Shipley, Michael Pollan, Jack Hitt, Pilar Viladas, Joele Cuyler, Janet Froelich, and Camille Sweeney. Calatrava, known internationally as a designer of bridges and public buildings, is also a sculptor. He has described his capsule as a flower. The Calatrava design (pictured above) is derived from a series of sculptures that explores the formal properties of folded spherical frames. His design comprises the basic forms of line, circle, and square. The form of the capsule can be sliced through horizontally, forming two halves, and then quartered. The four top segments are hinged to the bottom four, allowing them to open and close. The cavities of the segments are hollow and the eight compartments together contain about 50 cubic feet of storage space, a great deal of which will be filled with Nanogel, vacuum insulation panels that will protect the contents placed inside the capsule.
The Times Capsule was constructed at A.R.T. Design in Lancaster, Pennsylvania, using the ancient "lost-wax" process. This multistep technique involves creating a series of molds and models of different materials, culminating in a final stainless steel cast of the eight-unit capsule.
Posted by Noel Y. C. at 4:40 PM