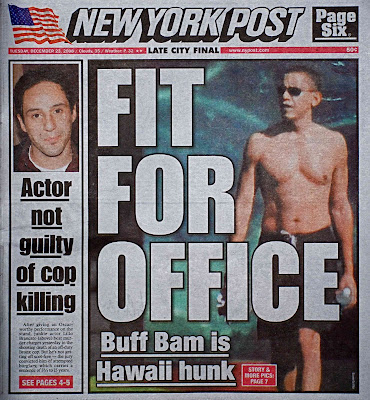 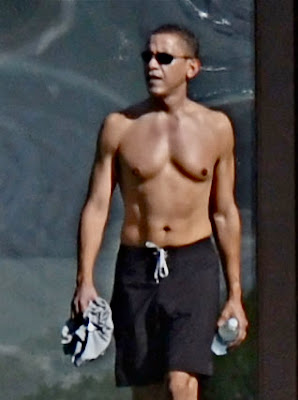 On its front page, the New York tabloid NEW YORK POST features a shirtless photo of President-elect Barack Obama who is vacationing in Hawaii with his family. Maggie Haberman's feature article is titled "O, My Bod! It's Beach Barack."
From wikipedia:
The New York Post is the 13th-oldest newspaper published in the United States and generally acknowledged as the oldest to have been published continually as a daily, although -- like most other papers -- its publication has been interrupted by labor actions. Since 1993, it has been owned by Australian-born billionaire Rupert Murdoch's News Corporation, which previously had owned it from 1976 to 1988, and is one of the 10 largest newspapers in the United States. Its editorial offices are located at 1211 Avenue of the Americas, in the New York City borough of Manhattan.
The New York Post has been criticized since the beginning of Murdoch's ownership for what many consider its lurid headlines, sensationalism, blatant advocacy and conservative bias.
Posted by Noel Y. C. at 4:45 PM