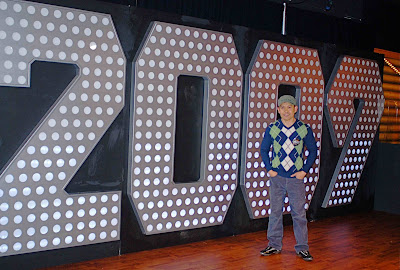 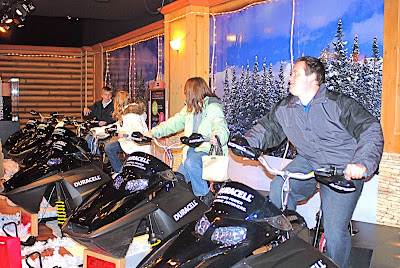 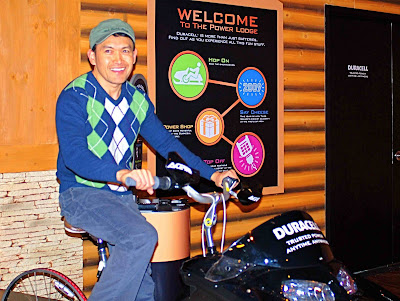 Last Saturday, I visited the DURACELL POWER LODGE in Times Square and hopped on one of the snowmobikes and pedaled to generate power. The energy generated will be used to fill batteries and power the iconic numerals 2-0-0-9 that light up as the New Year's Ball drops and the clock strikes midnight. The Power Lodge is located on Broadway, between 45th and 46th Streets.
From Marketwatch.com:
To capture the energy needed to illuminate "2009," Duracell is inviting guests to the Duracell Power Lodge at the Charmin Restrooms in Times Square to hop on a snowmobike to generate power. The snowmobikes operate through rotary technology, capturing energy through the spinning wheel when the bike is pedaled. From there, power is routed into the Duracell Battery Center where it will be stored until New Year's Eve and trusted to light the night's most important moment.
"At Duracell we are always looking for new and innovative ways to store energy for consumers to power their important moments," said Rick June, vice president and general manager, North America. "The Duracell Power Lodge is a giant example of the work we do every day. This time the battery is bigger and we're storing people power to light up the 2009 display when the world famous New Year's Ball drops in Times Square at midnight. Our guests in New York will truly be powering the New Year with Duracell."
In addition to lighting up the New Year, visitors to the Duracell Power Lodge will be able to recharge from the holiday hustle and bustle with a variety of entertainment activities. The Duracell Recharge Rest Stop allows visitors to plug-in and charge their personal entertainment and digital devices -- including digital cameras, cell phones, BlackBerrys, iPods, MP3 players and gaming devices -- by using Duracell power stations. Families will enjoy fun, interactive activities courtesy of Duracell and partners Nintendo and Mattel. Kids can enjoy multiple Wii stations and an early look at some of the hottest toys of the season, including Mattel's D-Rex Interactive Dinosaur.
The Duracell Power Lodge is being held in conjunction with the annual Charmin Restrooms in Times Square. For the third consecutive year, the Charmin Restrooms have returned to Times Square and the Duracell addition adds up to 2 floors of fun: the first for "relief" where tourists and New Yorkers alike can further enjoy the ultimate bathroom experience and the second where visitors can "recharge" their devices and their holiday spirit.
Harnessing Holiday Energy -- How It Works
More than 200 pedal hours are needed to power "2009" on New Year's Eve. Six snowmobikes, operating through rotary technology, will be on-site at the Duracell Power Lodge and available to visitors. As consumers begin to pedal, energy is captured through the wheel. The amount of energy captured is determined by the power, speed and length of the cycling. Duracell's capture and storage system is uniquely configured to harness the energy exerted while pedaling and convert it to power as it travels from the snowmobike to the Duracell Battery Center. The power will be transferred from the Duracell Power Lodge to One Times Square prior to December 31st in preparation for the New Year's Eve Ball drop festivities.
The Duracell Power Lodge and Charmin Restrooms are open now through December 31st from 10 a.m. to 9 p.m. Sunday through Wednesday, and 10 a.m. to 11 p.m. on Thursday through Saturday. They are located at 1540 Broadway in Times Square between West 45th and West 46th Streets. The Power Lodge and Restrooms will close at 6 p.m. on Christmas Eve and 3 p.m. on New Year's Eve, and will be closed on Christmas Day. In addition, this year, the Charmin Restrooms will also be open on New Year's Eve from 12 a.m. to 2 a.m., offering the crowd of millions in Times Square a safe and accessible bathroom haven after the 2009 Ball drops.
Posted by Noel Y. C. at 7:09 PM

Anonymous said...
This comment has been removed by a blog administrator.
December 9, 2008 at 8:59 PM