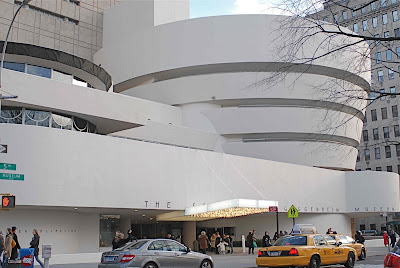 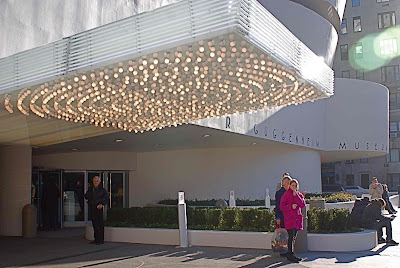 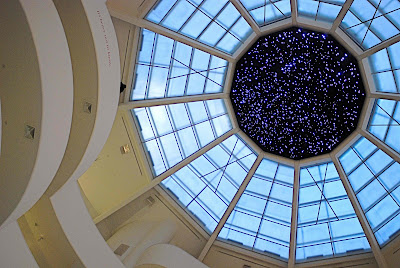 Ceiling
These are photos of the the distinctive GUGGENHEIM MUSEUM, taken when we visited last weekend. From September 2005 to July 2008, the Guggenheim Museum was enclosed in scaffolding while a team of architects, structural engineers, and conservators worked together to restore the building in preaparation for its 50th anniversary celebration in 2009. The museum is Frank Lloyd Wright's landmark building and his last major work that is widely revered today. From the street, the building looks approximately like a white ribbon curled into a cylindrical stack, slightly wider at the top than the bottom. Its appearance is in sharp contrast to the more typically boxy Manhattan buildings that surround it.
Information from wikipedia:
In the first phase of the restoration project, a team of restoration architects, structural engineers, and architectural conservators worked together to create a comprehensive assessment of the building's current condition that determined that the structure was, fundamentally sound. This initial condition assessment included: the removal of 11 coats of paint from the original surface, revealing hundreds of cracks caused over the years, primarily from seasonal temperature fluctuations detailed monitoring of the movement of selected cracks over 17 months impact-echo technology, in which sound waves are sent into the concrete and the rebound is measured in order to locate voids within the walls extensive laser surveys of the exterior and interior surfaces, believed to be the largest laser model ever constructed core drilling to gather samples of the original concrete and other construction materials testing of potential repair materials.
Posted by Noel Y. C. at 5:36 PM