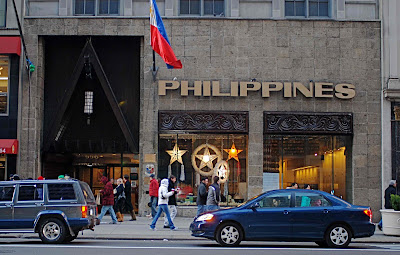 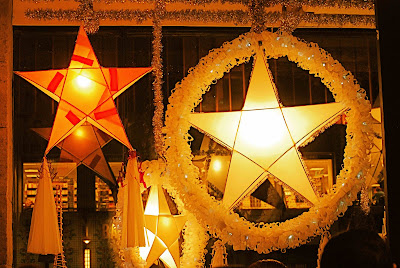 The traditional Philippine lanterns called PAROL adorn the Philipine Center on Fifth Avenue between 45th and 46th Streets. The term "parol" is derived from the Spanish word "farol" which means lantern.
From wikipedia:
Parols are ornamental star-like Christmas lanterns from the Philippines. They are traditionally made out of bamboo and paper and comes in various sizes, shapes and designs, however its star-shape façade and basic design remains dominant. Its shape is said to be inspired by the star on the Nativity of Jesus that guided the Magi to the manger. It also symbolizes the victory of light over darkness and the Filipinos' hope and goodwill during the Christmas season. The Parol, technically called Philippine Christmas lantern, was adapted from the Chinese lantern and the Mexican piñata to symbolize the Star of Bethlehem. Patterns of the parol evolved from the five-pointed star-shaped paper lantern that was crafted by an artisan named Francisco Estanislao in 1928. His creation was made of bamboo strips pasted with papel de japon (Japanese paper), illuminated by a candle or kalburo (carbide). This kind of lighting was adapted by barrio folks to light their paths during an annual ritual dawn Mass called Misa de Gallo, due to electricity being unavailable at the time.
Posted by Noel Y. C. at 7:44 PM