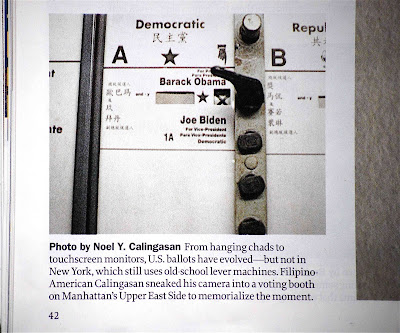 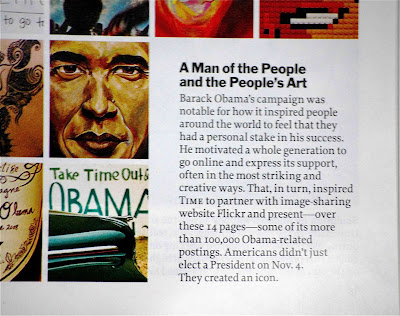 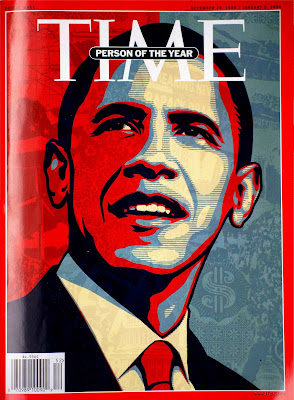 After casting my vote for Barack Obama last November 4, I took a photo of the old-fashioned lever voting machine that is still widely used in New York. I have previously posted this photo on this blog last November 4. The image landed a spot in the current issue (U.S. print version) of TIME MAGAZINE, the Person of the Year Issue (12/29/08-1/5/09 Double Issue). On the cover is President-elect BARACK OBAMA. In this issue, Time includes a citizen's gallery of the country's next President, in collaboration with the popular photo-sharing website, FLICKR. The historic 2008 election inspired thousands of people around the world, myself included, to post their Obama-themed photography, sculpture, painting and other artwork on FLICKR. The magazine editors examined 100,000 images and I am just thrilled that my humble point-and-shoot photo made the final cut. As one Flickr member puts it, what a fun and exciting way to be small part of something big. Yes we can!
Posted by Noel Y. C. at 8:59 AM

actually there are about 40 Flickr images and artwork featured in 14 pages of the magazine.

Question for you... first of all my name is DILLON. I am an artist in the Italy region. If you ever got the itch to see my work you can check it out at www.hollyworx.com. ...But the real reason I am contacting you is I was wondering if you seen this photo/painting in the new TIME mag that is currently up for discussion.

I was wondering if you mght send me a scan of it? I know you are very busy so if not dont worry about it. I am an Italy and I cant seem to find a great resource to obtain the mag. Also, I am dying to see where it landed in the mag. I would owe you big! Thanks in advance for your time. (as in TIME Magazine). lol j/k. Anywayz, keep up the great work. Thanks again!

Hi Dillon,
Your beautiful painting is on page 43 of TIME and I just sent you an image of the page through your email at hollyworx.com. Let me know if the email went through.
Congratulations again, good luck with everything and Happy Holidays!

Noel, I just wanted to say Merry X-mas and thanks again for the help the other day. Us artists gotta stick together. Have a safe one.

Merry Christmas to you and your loved ones, Dillon. More success for you in the new year. Btw, I'm not really an artist by profession. This is just a hobby for me but I wish I could really say I'm also an artist!