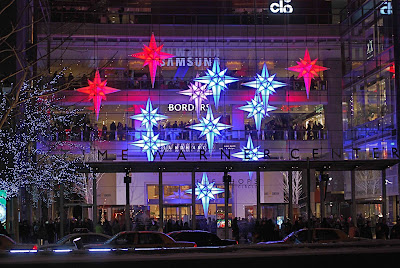 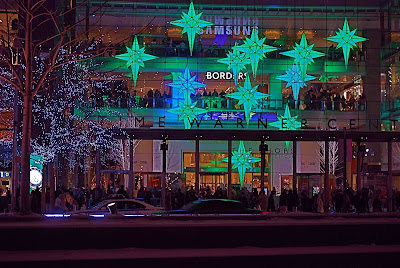 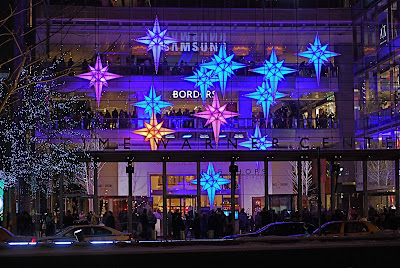 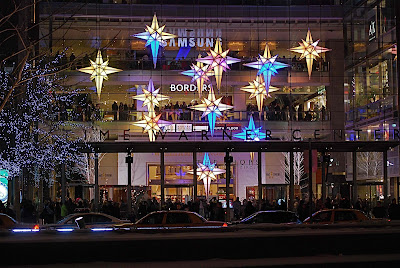 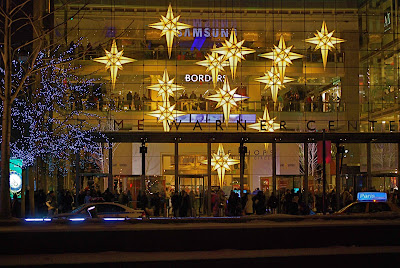 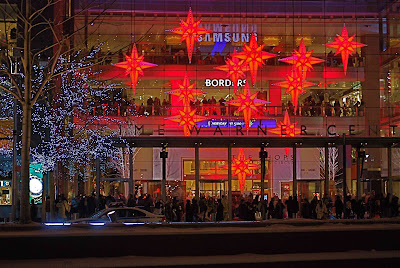 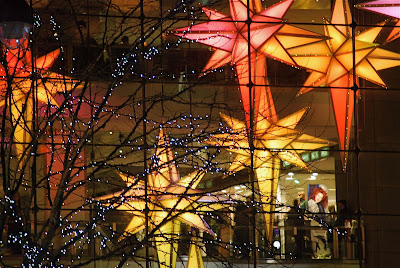 These are the images of the Stars that adorn the TIME WARNER CENTER each year during the holiday season. I took these photos from Columbus Circle.
From colorkinetics.com:
Entitled Under the Stars, the installation comprised twelve 14-foot stars that were suspended from the Time Warner Center’s towering 75-foot atrium. The stars, consisting of aluminum frames with acrylic panels, were each illuminated by 20 Color Kinetics® ColorBlast® 12 systems – allowing them to perform choreographed color changes in accordance with original music adapted from The Nutcracker Suite. Several three-minute light shows were programmed to run every fifteen minutes between 4:00 – 10:00 pm. The individually controllable ColorBlast 12 systems allowed for multiple color changes within a single star, or synchronized effects across all of the stars.
The Time Warner Center is located at 10 Columbus Circle. The 750 feet, twin-towered multi-use complex, named Columbus Centre (or AOL Time Warner Center), houses the AOL Time Warner World Headquarters, a 250-room/suite luxury hotel (the Mandarin Oriental, New York) spaces for retail, entertainment, restaurants and offices, 225 luxury apartments, as well as CNN live broadcast production studios and a 12,500 m² concert hall for the use of Jazz at Lincoln Center. The incorporated hotel has the "first" floor of its public areas located over 75 meters above ground and feature a spa and a health club. A 500 m² ballroom overlooks Central Park.
Posted by Noel Y. C. at 10:46 AM