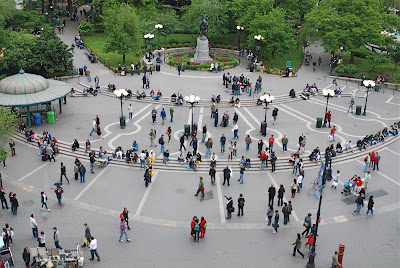 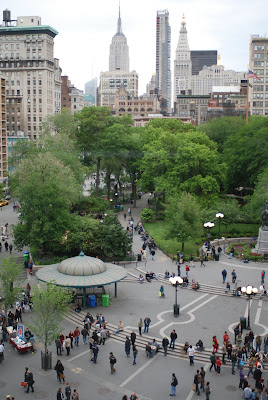 Last Sunday, I made these images of the south end of UNION SQUARE PARK from the 7th Floor of the department store called Filene's Basement.
From wikipedia:
Union Square is an important and historic intersection in New York City, located where Broadway and the Bowery came together in the early 19th century; its name does not celebrate either the federal union or labor unions but rather denotes the fact that "here was the union of the two principal thoroughfares of the island" and the confluence of several trolley lines, as in the term "union station." Today it is bounded by 14th Street to the south, Union Square West on the west side, 17th Street on the north, and on the east Union Square East, which links together Broadway and Park Avenue South to Fourth Avenue and the continuation of Broadway. Union Square Park is under the aegis of the New York City Department of Parks and Recreation.
Neighborhoods around the square are the Flatiron District to the north, Chelsea to the west, Greenwich Village to the south, and Gramercy to the east. Many buildings of The New School are near the square, as are several dormitories of New York University.
The eastern side of the square is dominated by the Zeckendorf Towers, and the south side by One Union Square (1999), which was voted "New York's Ugliest Building" by a panel of architects assembled by the New York Post. It features a kinetic wall sculpture and digital clock expelling bursts of steam, titled Metronome.
Union Square is noted for its impressive equestrian statue of George Washington, modeled by Henry Kirke Brown and unveiled in 1856, the first public sculpture erected in New York since the equestrian statue of George III in 1770 and the first American equestrian sculpture cast in bronze. Other statues in the park include the Marquis de Lafayette, modeled by Frédéric-Auguste Bartholdi and dedicated at the Centennial, July 4, 1876, Abraham Lincoln, modeled by Henry Kirke Brown (1870), and the James Fountain (1881), a Temperance fountain with the figure of Charity who empties her jug of water, aided by a child; it was donated by Daniel Willis James and sculpted by Adolf Donndorf. A newer addition is a statue of Mahatma Gandhi in the southwest corner of the park, added in 1986, to mark Union Square's history of social activism.
Posted by Noel Y. C. at 11:31 AM