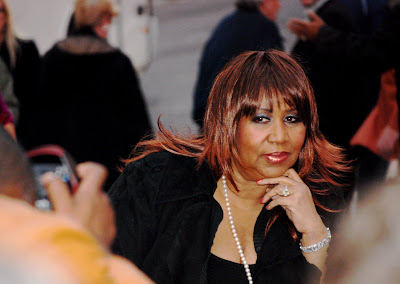 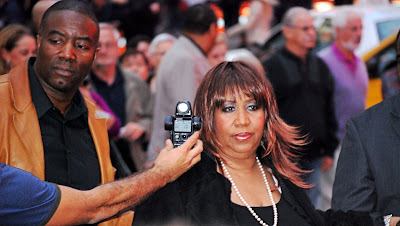 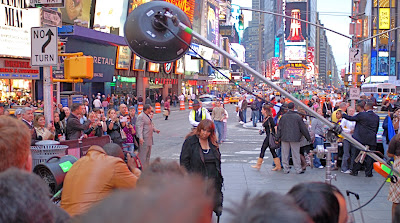 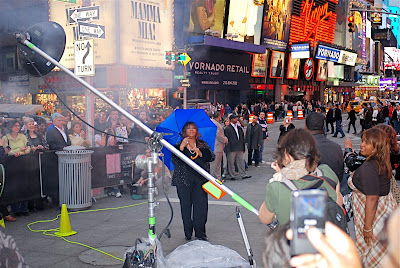 Last Thursday night, we caught a glimpse of a photoshoot of American singer-songwriter ARETHA FRANKLIN in Father Duffy Square. Also known as THE QUEEN OF SOUL, Ms. Franklin has won eighteen Grammy Awards in total during her nearly half-century long career (she first charted in 1961), and holds the record for most Best Female R&B Vocal Performance awards with eleven to her name (including eight consecutive awards from 1968 to 1975 - the first eight awarded in that category).
From wikipedia:
Aretha Louise Franklin (born March 25, 1942)[1] is an African American singer, songwriter and pianist commonly referred to as "The Queen of Soul". Although renowned for her soul recordings, Franklin is also adept at jazz, rock, blues, pop, R&B and gospel. In 2008, the American music magazine Rolling Stone ranked Franklin #1 on its list of The Greatest Singers of All Time.
Franklin is one of the most honored artists by the Grammy Awards, with 20 Grammys to date, which include the Living Legend Grammy and the Lifetime Achievement Grammy. She also sang at the presidential inauguration of 44th President of the United States Barack Obama. She has scored a total of 20 #1 singles on the Billboard R&B Singles Chart, two of which also became #1 hits on the Billboard Hot 100: "Respect" (1967) and "I Knew You Were Waiting (For Me)" (1987), a duet with George Michael. Since 1961, Franklin has scored a total of 45 "Top 40" hits on the Billboard Hot 100 chart.
In 1987, Franklin became the first female artist to be inducted into the Rock and Roll Hall of Fame. Franklin sang at the inauguration concerts for Bill Clinton in 1993 and at the inauguration ceremony for Barack Obama in 2009 (wearing a hat, designed by Luke Song that would become a fashion statement and desired by many but disliked by others).
Posted by Noel Y. C. at 8:39 AM