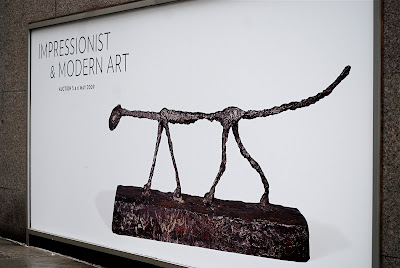 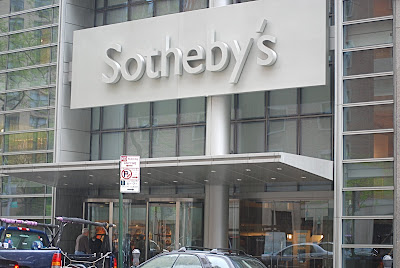 In preview on the Upper Eastside's SOTHEBY'S are precious works of art prior to the IMPRESSIONIST AND MODERN ART AUCTION on May 6. We went to Sotheby's this afternoon to view the paintings and sculpture including "The Cat" by ALBERTO GIACOMETTI. This piece is one of the most expensive works in Sotheby's sale on Tuesday. Works of other great artists are also on view including PABLO PICASSO, CAMILLE PISSARRO, PIERRE-AUGUSTE RENOIR, PIET MONDRIAN, CLAUDE MONET, AUGUSTE RODIN, TAMARA DE LEMPICKA, etc. Aside from museums, going to auction previews provides another rare opportunity to enjoy and appreciate great works of art in the city.
EXHIBITION AT SOTHEBY'S (located at 1334 York Avenue)
Fri, 1 May 09, 10:00 AM - 5:00 PM Sat, 2 May 09, 10:00 AM - 5:00 PM Sun, 3 May 09, 1:00 PM - 5:00 PM Mon, 4 May 09, 10:00 AM - 5:00 PM Tue, 5 May 09, 10:00 AM - 12:00 PM
From the nytimes.com:
Although Giacometti was best known for his depictions of the human figure, he produced bronzes of both animals and once even told a writer: “The dog is myself. One day I saw it like that in the street. I was that dog.” Cats, some scholars say, were the artist’s metaphor for the vulnerability of the human race, and his renderings of them are particularly rare; there hasn’t been one at auction since 1975, when a similar sculpture fetched $130,000 at Sotheby’s in New York (over $500,000 in today’s dollars). On Tuesday Sotheby’s will once again be featuring a cat in its sale of Impressionist and modern art. Made in 1951 and cast in 1959 in an edition of eight, it is being sold by an unidentified Swedish collector who bought it in the 1960s. The auction house expects it to bring $16 million to $24 million. (Earlier this year, dealers say, Sotheby’s tried to sell the sculpture privately for a higher price.) Whether this will be catnip for collectors is anyone’s guess. A second cat from the same edition is rumored to be for sale privately in New York.
About Sotheby's:
Sotheby's New York is located on the Upper East Side of Manhattan at the corner of 72nd Street and York Avenue. Our 10-story premises are one block from the FDR Drive, and the neighborhood is well-served by ample parking.
As pioneers of the ever expanding international art market, Sotheby's opened the doors of its New York offices in 1955, and in 1967 acquired Parke-Bernet, the United States' largest fine art auction house. More than 50 years after opening, Sotheby's New York continues to thrive as the company's worldwide headquarters. Its history of success includes numerous high-profile sales such as the collections of Jacqueline Kennedy Onassis, the Duke and Duchess of Windsor and Katharine Hepburn.
In recent years Sotheby's has made auction history with Picasso's Garçon è la pipe and Dora Maar au chat, the two most expensive works sold at auction. In 2007 the New York headquarters held an array of exciting sales with property that spanned the centuries. The Magna Carta sold for $21.3 million and the Guennol Lioness brought $57.2 million, a record for an antiquity at auction and sculpture at auction. 2007 also brought continued interest in Contemporary art and numerous important works were sold in New York, including Mark Rothko's White Center (Yellow, Pink and Lavender on Rose), and Francis Bacon's Study from Innocent X. In May 2008, the Contemporary Art auction became the most successful in Sotheby's history, with Francis Bacon's Triptych, 1976 realizing $86.3 million, an auction record for the artist and a record for a Contemporary work sold at auction.
Posted by Noel Y. C. at 5:17 PM