Sailors On The Town: It's Fleet Week 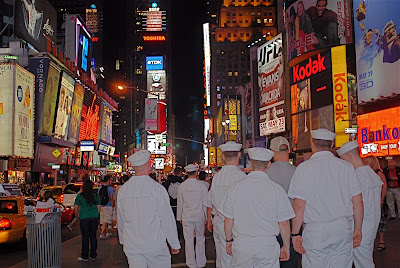 Since 1984, New York City has been hosting FLEET WEEK, a week long celebration to honor the U.S. Navy and Marine Corps. The week (May 20-26) features extensive military demonstrations, as well as the opportunity for the public to tour some of the visiting ships. Approximately 15 U.S. Navy and foreign warships and Coast Guard vessels anchor in and around the city. The Memorial Day commemoration is a highlight of the week's festivities, featuring the singing of Taps and a military aircraft fly over in honor of those who lost their lives in service to the United States. Locals and tourists will have the opportunity to tour visiting ships, attend lectures, watch the parade of ships in the harbor, watch competitions, including tug of war and eating contests, Memorial Day ceremony, and enjoy musical performances by sailors and marines.
Posted by Noel Y. C. at 7:29 PM