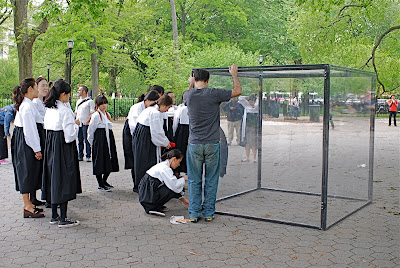 Preparing for the performance at Tompkins Square Park
Video posted by allyweng from a previous performance
Last Saturday was the last of a series of public art performances by YOONHYE PARK called BODIES OF PYONGYANG. Presented by ART IN ODD PLACES, "Bodies of Pyongyang" is a project involving 20 female performers inside a clear cube installation. According to the postcards handed out to the viewers at the park, "The performances are supposed to incite awareness about prevailing women's issues in North Korea to the international and multicultural communities of Manhattan." The last performance was held at Tompkins Square Park.
Posted by Noel Y. C. at 5:24 PM