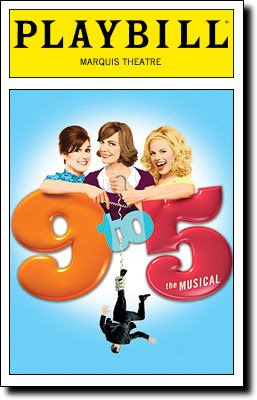 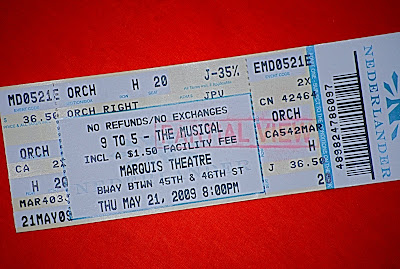 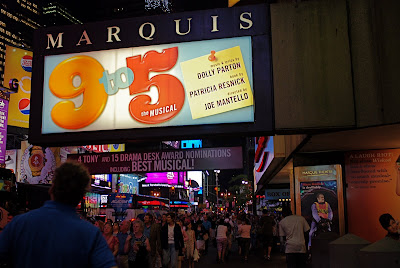 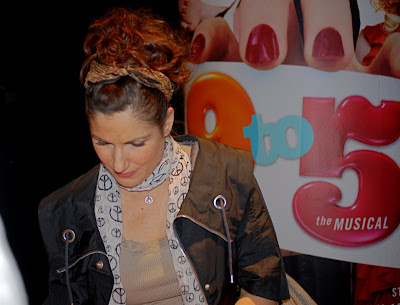 Stephanie J. Block outside the stagedoor of the Marquis Theatre
After 5 this evening, I tried my luck in the theater ticket lottery for "9 to 5 the Musical" and won. This new musical based on the 1980 movie of the same title, is an entertaining story of revenge and friendship during the typewriter era with music by DOLLY PARTON and direction by JOE MANTELLO (Wicked, Assassins, Take Me Out). While others feel that the show is just mildly amusing, I find it hilarious and quite entertaining. The lead stars ALLISON JANNEY, STEPHANIE J. BLOCK and MEGAN HILTY, as well as MARC KUDISCH delivered. The show earned 4 Tony and 15 Drama Desk nominations.
The “9 to 5” Broadway reviews:
Hollywood Reporter - “You’d be better off watching the movie while listening to Dolly’s new album.”
NY1 - “As a musical, “9 To 5” is pretty flimsy stuff but credit is due to a very talented company that works overtime to sell it.”
New York Times - “The musical “9 to 5,” which overmilks and overmikes tuneful songs by Ms. Parton (who wrote the movie’s popular title number, which is the opener here), is at least blessed with the presence of Allison Janney. This deliciously droll actress is known for playing exceedingly competent people (“The West Wing” on television, “Present Laughter” on Broadway) with much more than mere competence, and her game but dignified professionalism is the show’s biggest asset.”
Variety - “The other big ace up the show’s sleeve is Dolly Parton. Regrettably, the Tennessee sparrow isn’t actually up there onstage, but she’s creditably channeled by Megan Hilty in the Doralee role, from the boobs-and-bouffant look to the twangy vocals, downhome charm and disarming pluckiness.”
Post - “Each of the female leads delivers, but Janney emerges as the most unlikely musical-theater star since … well, is it too early to say Bea Arthur? They share a droll sense of timing, an imposing height and a low-pitched voice (although Arthur sang better).”
Newsday - “‘9 to 5” is a female-empowerment theme-park musical - complete with a spunky Dolly Parton impersonator and lots of faceless scenery that might as well have been moving animatronics.”  Wall Street Journal - “”9 to 5” is a Big Mac musical, a surprise-free entertainment machine based on a hit movie. Buy a ticket and you don’t have to guess what you’ll be getting: You already know, right down to the number of pickles on the sesame-seed bun that is Joe Mantello’s ultraefficient staging. From start to finish, it does what it’s supposed to do — and no more.”
USA Today - “The libretto, adapted by Patricia Resnick from her original screenplay, has a populist bent that, if timely, can take on a self-conscious earnestness. But she has also retained a flair for wry, cheeky humor that is well served by the cast — particularly Allison Janney, who deftly fills Lily Tomlin’s shoes as long-suffering office manager Violet Newstead. Janney may not have a mellifluous singing voice, but her delectably tart delivery, of songs as well as dialogue, is one of the production’s two strongest assets.”
Daily News - “Not every tune is a home run, and some lyrics are too plain-spoken. But enough of them stand out, like “I Just Might,” a bright, optimistic ballad. The best number, “Change It,” is about the office but really addresses larger issues, and makes the show shine.”
Associated Press - “Best of all is Block, as the neophyte office worker (the Jane Fonda part in the movie), who’s newly liberated from her spouse and ready to begin life anew. Block delivers the evening’s big anthem: “Get Out and Stay Out,” directed at her husband who has dumped her for a 19-year-old. She gets to stop the show all by herself.”
Bloomberg - “Probably the show’s most praiseworthy attribute is Andy Blankenbuehler’s farcically hyperactive choreography, which would truly fly — if only it could shake the rest of the show off its wings. “  amNewYork - ““9 to 5” had the potential to be a great musical comedy. And while faint hints of a crowd-pleaser occasionally occur, sitting through this faithful adaptation feels as tiresome as a long day at the office.”
Chicago Tribune - ““9 to 5” has its enjoyments—many of which flow from the lips of the deliciously sardonic Janney, who is such a great comedic actress one forgives her lack of a singing voice.”
Toronto Star - “While the audience around me was rocking with laughter and raising the roof with its cheers, all I ever felt was mild amusement.”
Ticket Lottery:
They offer $36.50 tickets to each performance.   A total of 38 tickets will be sold at the box office 90 minutes prior to each show, cash only and no more than two per person. Entries for the lottery can be submitted two hours before the show. Regular tickets are priced $65 to $120. Premium seats are $300.  “9 to 5” has an open-ended run at the Marquis Theatre, located at 211 W. 45th St., map.  The “9 to 5” Broadway lottery schedule:  Tuesday lottery: enter at 5 p.m.; drawing at 5:30 p.m.; show at 7p.m. Wednesday-Saturday night lottery: enter at 6 p.m.; drawing at 6:30 p.m; show a 8 p.m. Wednesday and Saturday matinee lottery: enter at noon; drawing at 12:30 p.m.; show at 2 p.m. Sunday night lottery: enter at 1 p.m.; drawing at 1:30 p.m.; show at 3 p.m.
Posted by Noel Y. C. at 8:56 PM