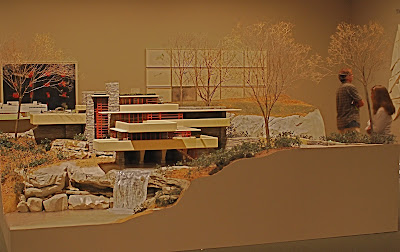 This is a scale model of FALLINGWATER, also known as the Edgar J. Kaufmann Sr. Residence designed by American architect FRANK LLOYD WRIGHT (1867-1959) in 1934 in Mill Run, Pennsylvania. The model is on display at the Museum of Modern Art.
From wikipedia:
The house was built partly over a waterfall in Bear Run at Rural Route 1 in the Mill Run section of Stewart Township, Fayette County, Pennsylvania, in the Laurel Highlands of the Allegheny Mountains.
Hailed by TIME magazine shortly after its completion as Wright's "most beautiful job," the home partly inspired Ayn Rand's novel The Fountainhead, and is listed among Smithsonian magazine's Life List of 28 places "to visit before ...it's too late." Fallingwater was featured in Bob Vila's A&E Network production, Guide to Historic Homes of America. It was designated a National Historic Landmark in 1966. In 1991, members of the American Institute of Architects named the house the "best all-time work of American architecture" and in 2007, it was ranked twenty-ninth on the list of America's Favorite Architecture according to the AIA.
Posted by Noel Y. C. at 7:47 PM