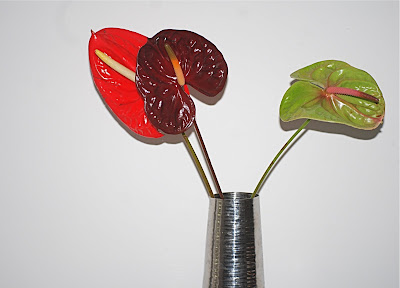 Anthurium from Dean and DeLuca in Soho
From wikipedia:
Anthurium (pronounced /ænˈθjuːriəm/)[1] (Schott, 1829), is a large genus of about 600- 800 (possibly 1,000) species, belonging to the arum family (Araceae). Anthurium can also be called "Flamingo Flower" or "Boy Flower", both referring to the structure of the spathe and spadix.
TROPICOS lists 1901 types, although some of these are duplicates. It is one of the largest and probably the most complex genus of this family; certainly it is one of the most variable. Many species are undoubtedly not yet described and new ones are being found every year. The species has neotropical distribution; mostly in wet tropical mountain forest of Central America and South America, but some in semi-arid environments. Most species occur in Panama, Colombia, Brazil, the Guiana Shield and Ecuador. According to the work of noted aroid botanist Dr. Tom Croat of the Missouri Botanical Garden, this genus is not found in Asia.[2] Some species have been introduced into Asian rain forests, but are not endemic.
Anthurium flowers are small (about 3 mm) and develop crowded in a spike on a fleshy axis, called a spadix, a characteristic of the Araceae. The flowers on the spadix are often divided sexually with a sterile band separating male from female flowers. This spadix can take on many forms (club-shaped, tapered, spiraled, and globe-shaped) and colors (white, green, purple, red, pink, or a combination).
The spadix is part of an inflorescence, the outer portion of which is known as the spathe. The spathe may be a single color (yellow, green, or white) or possibly multicolored including burgundy and red. That sometimes colorful, solitary spathe is a showy modified bract that can be somewhat leathery in texture. Anthurium grown for the florist trade generally have highly coloured spathes and spadices. There are no flowers on the spathe as is sometimes thought; flowers are found solely on the spadix. The spathe can vary in color from pale green to white, rose, orange or shiny red (such as A. andrenaum). The color changes between the bud stage and the anthesis, (the time the flower expands). Thus the color might change from pale green to reddish purple to reddish brown.
Posted by Noel Y. C. at 5:57 PM

Email ThisBlogThis!Share to TwitterShare to FacebookShare to Pinterest
Labels: Anthurium