Mozart's THE MAGIC FLUTE at the METROPOLITAN OPERA 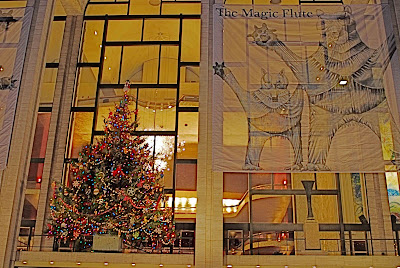 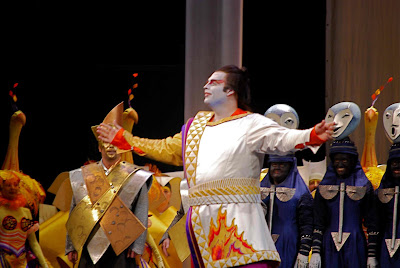 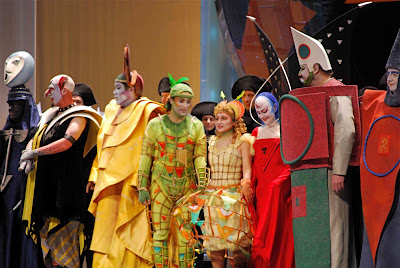 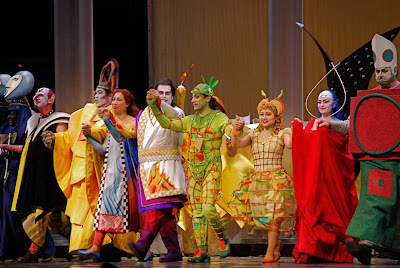 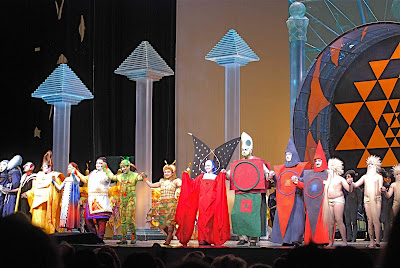 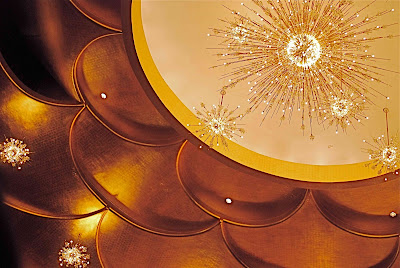 The gorgeous ceiling and chandelier at The Metropolitan Opera
We celebrated New Year's Eve by attending a matinee performance of JULIE TAYMOR's spellbinding production of Mozart’s operatic fairy tale, THE MAGIC FLUTE at the METROPOLITAN OPERA. This abridged English-language production, with four matinee performances, features colorful costumes and puppets. The production is delightful and enchanting, and kid-friendly. The new English translation is by J.D. McClatchy.
Synopsis:
Three ladies in the service of the Queen of the Night save the fainting Prince Tamino from a serpent (Introduction: “A serpent! A monster!”). When they leave to tell the queen, the bird catcher Papageno bounces in and boasts to Tamino that it was he who killed the creature (“I’m Papageno”). The ladies return to give Tamino a portrait of the queen’s daughter, Pamina, who they say is enslaved by the evil Sarastro, and they padlock Papageno’s mouth for lying. Tamino falls in love with Pamina’s face in the portrait (“This portrait’s beauty”). The queen, appearing in a burst of thunder, is grieving over the loss of her daughter; she charges Tamino with Pamina’s rescue (“My fate is grief”). The ladies give a magic flute to Tamino and silver bells to Papageno to ensure their safety, appointing three spirits to guide them (Quintet: “Hm! hm! hm! hm!”).
Sarastro’s slave Monostatos pursues Pamina (Duet: “You will not dare escape”) but is frightened away by the feather-covered Papageno, who tells Pamina that Tamino loves her and is on his way to save her. Led by the three spirits to the Temple of Sarastro, Tamino is advised by a high priest that it is the queen, not Sarastro, who is evil. Hearing that Pamina is safe, Tamino charms the animals with his flute, then rushes to follow the sound of Papageno’s pipes. Monostatos and his cohorts chase Papageno and Pamina but are left helpless by Papageno’s magic bells. Sarastro, entering in great ceremony (Chorus: “Long life to Sarastro”), promises Pamina eventual freedom and punishes Monostatos. Pamina is enchanted by a glimpse of Tamino, who is led into the temple with Papageno.
Sarastro tells his priests that Tamino will undergo initiation rites (“O Isis and Osiris”). Monostatos tries to kiss the sleeping Pamina (“Men were born to be great lovers”). He is discovered by the Queen of the Night, who dismisses him. She gives her daughter a dagger with which to murder Sarastro (“Here in my heart, Hell’s bitterness”).
Sarastro confronts and then consoles the weeping Pamina (“Within our sacred temple”). Tamino and Papageno are told by a priest that they must remain silent and refrain from eating, a vow that Papageno immediately breaks when he takes a glass of water from a flirtatious old lady. The old lady vanishes when he asks her name. The three spirits appear to guide Tamino through the rest of his journey and to tell Papageno to be quiet. Tamino remains silent even when Pamina appears, which breaks her heart since she cannot understand his reticence (“Now my heart is filled with sadness”).
The priests inform Tamino that he has only two more trials to complete his initiation (Trio: “Why, beloved, must we part?”). Papageno longs for a cuddly wife but settles for the old lady. When he promises to be faithful she turns into a young Papagena but immediately disappears.
After many dangers, Pamina and Tamino are reunited and face the ordeals of water and fire protected by the magic flute.
Papageno is saved from attempted suicide by the spirits, who remind him that if he uses his magic bells he will find true happiness. When he does, Papagena appears and the two plan for the future and move into a bird’s nest (Duet: “Pa-pa-pa…”). The Queen of the Night, her three ladies, and Monostatos attack the temple but are defeated and banished. Sarastro joins Pamina and Tamino as the people hail Isis, Osiris, and the triumph of courage, virtue, and wisdom..
Posted by Noel Y. C. at 5:18 PM