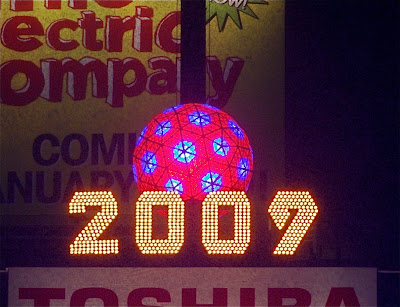 The new Times Square New Year's Eve ball was relit last week and sent up a 141-foot flagpole on the roof of One Times Square. The ball will remain lit until the next New Year's celebration and even be used to help celebrate other holidays this year. I took this photo last January 10. "This is a New York City landmark now. It's a tourist attraction that people from all over the world will come and see, just like the Statue of Liberty, the Empire State Building," said President Jeffrey Straus of Countdown Entertainment. "When you make your trip to New York and Times Square, your going to take back home a picture of this New Years' Eve ball with 2009 underneath."
The new Times Square New Year’s Eve Ball is a 12 foot geodesic sphere, double the size of previous Balls, and weighs 11,875 pounds. Covered in 2,668 Waterford Crystals and powered by 32,256 Philips Luxeon Rebel LEDS, the new Ball is capable of creating a palette of more than 16 million vibrant colors and billions of patterns producing a spectacular kaleidoscope effect atop One Times Square.
WATERFORD CRYSTAL created an exclusive “Let There Be Joy” design for the crystal triangles on the new Ball. Designed and crafted by Waterford artisans in Ireland, “Let There Be Joy” features the design of an angel with arms uplifted welcoming the New Year on each of the 1,728 new crystals. The remaining 960 triangles are last year’s “Let There Be Light” design of a stylized radiating starburst.
"The new 2009 Times Square New Year's Ball represents the perfect blend of time-honored craftsmanship and state of the art technology," says Pete Cheyney, Director of Corporate Communications for Waterford Crystal. "The theme for the Waterford crystals on this year's Ball, "Let There be Joy" reflects our belief that New Year's Eve is a time when happiness and optimism for the future should be at the forefront of everyone's thoughts. We at Waterford consider the Ball to be of our Company's greatest achievements."
Posted by Noel Y. C. at 7:41 PM