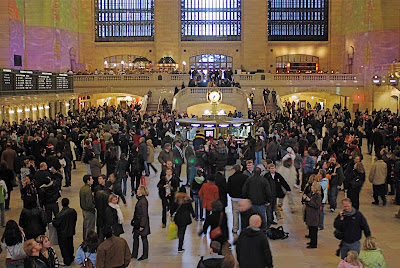 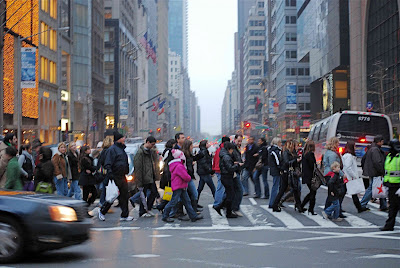 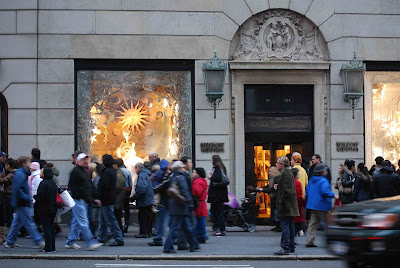 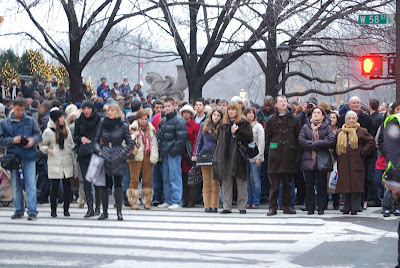 During the past holiday season, I made images of huge crowds inside Grand Central Station and on Fifth Avenue's shopping district. It turns out that NYC scored a record 47 million tourists in 2008 despite the global economic downturn.
From Travelagentcentral.com
New York City attracted an estimated 47 million visitors and earned $30 billion in total spending in 2008, both record highs, according to NYC & Company, the city’s marketing, tourism, and partnership organization. The 2008 figures surpass the 46 million visitors and $28.9 billion New York City attracted in 2007.
International tourism accounted for the increase, with an additional 1 million international visitors coming to the city in 2008, bringing the total to 9.8 million. This past year, NYC & Company reports it completed its planned global expansion to 25 international markets, launched domestic and international marketing campaigns, and opened new convention sales offices in California and Illinois.
Last year, the city surpassed top destinations such as Orlando and Las Vegas to rank number one in tourism spending in the U.S. for the first time. NYC & Company projects record tourism numbers will keep New York in the top spot for 2008.
New York City’s hotel occupancy rates continued to top the national average in 2008 by at least 20 percentage points despite the economic downturn. The city added 1,800 net rooms to its hotel inventory, bringing the total to roughly 75,600 rooms, and, in 2008, room demand increased 2 percent. Through September, attendance at New York City visitor attractions and cultural organizations rose 14 percent over the same period last year, according to NYC & Company estimates.
“Despite the economic challenges all cities are facing, tourism remains a bright spot for New York City,” said Mayor Michael Bloomberg. “To be sure, the ongoing downturn will weigh on New York City’s hospitality industry as people all over the world cut back on travel, but the investments we’ve made to promote New York City will continue to pay dividends, now more than ever. The number of overseas travelers coming to New York City continues to rise, and now roughly a third of all who come to the U.S. come to New York. The importance of diversifying our economy is clearer today than ever, and we will continue to make strategic investments to promote New York City and keep it the place travelers want to come.”
Posted by Noel Y. C. at 5:58 AM

Email ThisBlogThis!Share to TwitterShare to FacebookShare to Pinterest
Labels: Grand Central Terminal tourists and commuters, Record Tourism in NYC in 2008