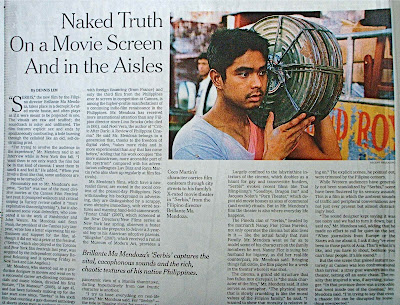 Featured in the Arts and Leisure section of last Sunday's The New York Times is an article about the Filipino movie called SERBIS directed by Brillante Mendoza. The film was an official selection at this year's Cannes Film Festival. This controversial film, starring Gina Pareno, Jaclyn Jose and Julio Diaz, tells the story of the Pineda family who operates a run-down movie house showing dated, sexy double-feature films. Preoccupied with their personal demons, the family is unaware of the transactions taking place in their theater between the patrons and "serbis" (service) boys.
The movie opens today at the Angelika Film Center, located at 18 West Houston Street (at Mercer Street).
TODAY 3:30 PM 5:45 PM 8:05 PM 10:20 PM  SATURDAY, JANUARY 31, 2009 12:30 AM 11:00 AM 1:15 PM 3:30 PM 5:45 PM 8:05 PM 10:20 PM  SUNDAY, FEBRUARY 01, 2009 11:00 AM 1:15 PM 3:30 PM 5:45 PM 8:05 PM 10:20 PM  MONDAY, FEBRUARY 02, 2009 11:00 AM 1:15 PM 3:30 PM 5:45 PM 8:05 PM 10:20 PM  TUESDAY, FEBRUARY 03, 2009 11:00 AM 1:15 PM 3:30 PM 5:45 PM 8:05 PM 10:20 PM  WEDNESDAY, FEBRUARY 04, 2009 11:00 AM 1:15 PM 3:30 PM 5:45 PM 8:05 PM 10:20 PM  THURSDAY, FEBRUARY 05, 2009 11:00 AM 1:15 PM 3:30 PM 5:45 PM 8:05 PM 10:20 PM
Review from the New York Times (By Manohla Dargis)
Gentle, bawdy and at times rambunctiously, ticklishly rude, the Filipino movie “Serbis” opens with the camera ogling a naked woman preening before a mirror. “I love you,” she coos to her reflection, “I love you,” as the camera’s point of view drifts between her face and breasts. In most movies this scene might foretell a predictable exercise in exploitation cinema. But the talented director Brillante Ma. Mendoza is after something slyer and more thoughtful than easy nudity for his latest, a story about a dilapidated movie theater and the fractured family that is trying not to disintegrate further inside its derelict walls. Like the family, the adults-only theater has fallen on hard times. Both are located in Angeles City, where the massage parlors were once filled by American military personnel from the nearby, now shuttered Clark Air Base, one of the largest installations of its kind. Mr. Mendoza — whose earlier movies include “Foster Child,” about a poor woman who earns money caring for foundlings headed for overseas homes — doesn’t fill in the socioeconomic backdrop, perhaps because his native audience doesn’t need it. Nor does he explain that abortion is illegal in his largely Roman Catholic country: he just offers up a pregnant woman bitterly weeping while her lover looks on in panic, and the family’s regal matriarch (Gina Pareño) damns them both. Content to show rather than tell, Mr. Mendoza trains his roving camera on the family walking and running through the theater’s long halls and up and down its serpentine staircases. Among the most restless is Nayda (Jaclyn Jose), one of those besieged women whose good looks are being chipped away by everyday worries. Nayda doesn’t have much time to pause, much less rest, between chasing after her young son and tending to those customers who stop for a bite at the cafe next to the box office. Far less troublesome are the customers who venture inside, where, under the dimly flickering light of the movies, they unite amid lip smacks, moans, offers of “service” and mumbled haggling. Mr. Mendoza isn’t the first filmmaker to set his camera loose in an old movie theater, a conceit that has been put to nostalgic and poetic use by the diverse likes of Giuseppe Tornatore (“Cinema Paradiso”) and Tsai Ming-liang (“Goodbye, Dragon Inn”). He underlines the divide between the lives off screen and the shadows on screen every time a character lingers next to a colorfully gaudy poster for an attraction like “Frolic in the Water.” Yet the theater — incongruously named Family — functions as more than a metaphor for a crumbling world: it’s a business, a home, a playground and a refuge for the family and its gay clientele, who are unlikely to join the religious masses passing by the theater in the movie’s finale. In “Serbis” politics isn’t a matter of slogans but of real bodies, which perhaps accounts for why it paradoxically unwinds in a movie theater. The heavenly bodies that populate our films bring their own pleasures, of course, alighting on screen as if from a dream. The bodies in this movie — which received little love at the 2008 Cannes Film Festival — are not heaven sent, but neither are they puppets in a cinematically contrived nightmare. Rather, they lust, sweat, desire and struggle with ferocious truth. In one scene a young man lances a boil on his rear with an empty bottle, a grotesquely funny affirmation of real life and real bodies at their most humble and humanly poignant. You might gag, but you definitely won’t forget it.
Directed by Brillante Ma. Mendoza; written by Armando Lao, based on a story by Mr. Lao and Boots Agbayani Pastor; director of photography, Odyssey Flores; edited by Claire Villa-Real; music by Gian Gianan; production design, Benjamin Padero and Carlo Tabije; produced by Ferdinand Lapuz; released by Regent Releasing. At the Angelika Film Center, Mercer and Houston Streets, Greenwich Village. In Tagalog, with English subtitles. Running time: 1 hour 33 minutes.
WITH: Gina Pareño (Nanay Flor), Jaclyn Jose (Nayda), Julio Diaz (Lando), Coco Martin (Alan), Kristofer King (Ronald), Dan Alvaro (Jerome), Mercedes Cabral (Merly) and Roxanne Jordan (Jewel).
Posted by Noel Y. C. at 10:24 AM

this was an unexpected great film. trapped in the film house with leaking taps and i swear i could smell the sweaty bodies and food being cooked downstairs. the street loud and the family trapped in it's own loyalty.