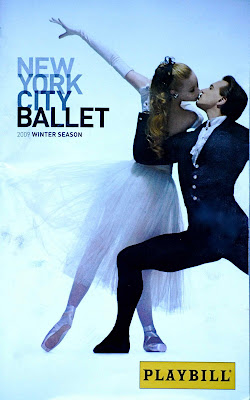 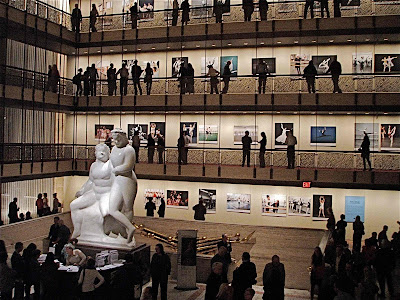 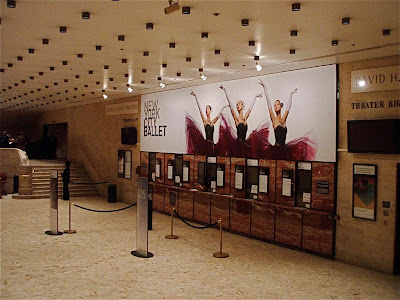 David Koch Theater Lobby
Last week, we caught a performance of the New York City Ballet called FOUR VOICES at the David H. Koch Theater, Lincoln Center Plaza located at Broadway and 63rd Street.
'Chiaroscuro' locates its six cast members between light and shadow as their weaving patterns unfold in complex interactions. Martins' fleet and fluttering quartet 'Papillons,' set to Schumann's piano music, returns this season for the first time since its 1994 premiere. Last season's critically-acclaimed 'Concerto DSCH,' with its thrilling Shostakovich score and dynamic texture, also returns for a second viewing. Rounding out the foursome is Balanchine's Austro-Hungarian 'Brahms-Schoenberg Quartet,' a proud and romantic yet wistfully yearning work that ends in an intoxicating gypsy finale. (From nyc.com)
Review from the New York Times (Alastair Macaulay):
To say that a choreographer has a voice implies a recognizable style. New York City Ballet’s new quadruple bill, each work by a different choreographer, is called “Four Voices.” Its two most substantial pieces suggest true voices, both individual and imaginative.
Alexei Ratmansky’s “Concerto DSCH,” new last May, is the centerpiece; George Balanchine’s “Brahms-Schoenberg Quartet” is the closer. Though they are stylistically dissimilar, there is an affinity in the way both choreographers are led by their scores to reimagine the historical world of their music — in “Concerto DSCH” the early Soviet climate of Shostakovich’s second piano concerto, and in “Brahms-Schoenberg” four aspects of late-19th-century Hapsburg Vienna — while staying extraordinarily close to its pulse and phrasing.
The perky outer movements of Shostakovich’s score prompt Mr. Ratmansky to vivid visions of a milieu of 1930s Russian athletes, while the beautifully tender slow movement occasions the ballet’s most sustained and intimate scene. Here Wendy Whelan and Benjamin Millepied dance an affectingly fresh pas de deux as part of a social group; the six other young people sometimes start to become couples too. As the music closes, they part, women and men in opposite directions, as if headed, regretfully, for separate dormitories.
The people of this ballet aren’t idealized or even, for all their physical skill, polished. Their ways of walking and sitting, their different reactions to one another, the sense of changing community in which individuals continually diverge from the norm are all vivid. How Mr. Ratmansky makes this grow as if inevitably out of this concerto is one wonder; the wealth of detail is another.
This was my third viewing of “Concerto DSCH,” and there was much I hadn’t noticed before. In the first movement a woman performs a sideways athletic balance on one hand and one foot: this prepares us for the same pose that the ballet’s heroine, Ms. Whelan, makes amid the final tableau. The start of the second movement has an engrossing wealth of interaction involving the six young men and women who will become the changing framework for this scene. (There’s an odd man out, then another, as happens throughout the ballet.) In the third movement a passage of legato music prompts an oddly dreamlike sequence where things threaten to fall apart: one athlete (Gonzalo Garcia) slowly falls to the floor and beats a fist.
But these and other features are less marvelous than the ballet’s constant changes of pattern and human dissonance, its shifts of tone between comedy, affection and exhilarating, youthful exuberance. Ms. Whelan and Mr. Millepied are, as they were last spring, excellent, heart-catching in the midheight hovering lifts where athleticism becomes feeling. Each step feels like something that happens for real to these characters in this moment.
I think, however, that “Concerto DSCH” was funnier when new. I like the way Ana Sophia Scheller — replacing the injured Ashley Bouder — doesn’t exaggerate the ballet’s second lead woman, but Ms. Bouder’s blend of knockabout comedy and physical brilliance is missed. And, though Joaquin de Luz and Mr. Garcia dance extremely well as her colleagues, some of their episodes had a stronger touch of absurdity before.
Balanchine’s choreographic construction of “Brahms-Schoenberg” — especially its first three movements — continues to fascinate. Its four views of Vienna make a rich counterpart to his “Vienna Waltzes.” The Brahms music prompts him to more high lifts than usual and to many strikingly complex images of male-female romantic interdependence. The supporting ranks in the first three movements — beautifully costumed by Karinska — are almost as compelling as the lead roles.
But this ballet takes off only when each movement is given a major ballerina performance. Abi Stafford was at her most conscientious in the first, Jenifer Ringer brought warmth and absorption to the second, and Maria Kowroski gives the Rondo alla Zingarese happy expansiveness. All three, however, lack bite and brightness, and Yvonne Borree is unacceptably small-scale and trivial in the third. (All are, however, admirably partnered by, respectively, Philip Neal, Jared Angle, Andrew Veyette and Charles Askegard, and the ballet’s best solo dancing came from Mr. Veyette.)
Neither Lynne Taylor-Corbett in “Chiaroscuro” nor Peter Martins in “Papillons” (both 1994), the other choreographers on the program, demonstrates a distinctive voice. The changing moods of Geminiani’s attractive score drives “Chiaroscuro’s” six dancers in such a variety of directions that they lack coherence; mainly we are shown their moody passivity.
By contrast, the spectrum of moods in “Papillons” is narrow and trite. Surely not even major dancers could make its butterfly theme (slight) interesting. Darci Kistler and Megan Fairchild are tediously trivial throughout, and their partners — the excellent Angle brothers, Jared and Tyler — are mainly occupied by keeping them airborne or upright. The ballet uses Schumann music while avoiding its real originality. Is there any good reason City Ballet’s audience is being fed revivals of these wholly forgettable items?
Posted by Noel Y. C. at 5:36 PM