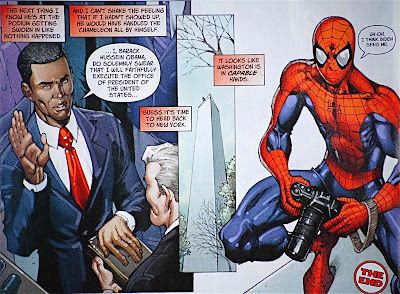 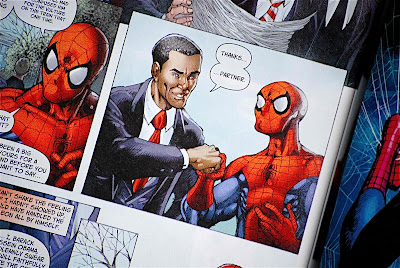 Today, Marvel Comics released a special issue of "Amazing Spider-Man #583" with Obama depicted on the cover. Inside are five pages of OBAMA and SPIDEY teaming up and even fist-bumping. I made images of two panels from the comics that I purchased from JIM HANLEY'S UNIVERSE at 4 West 33rd Street across from the Empire State Building. The issue becomes an instant Obama collectible because the cover, by artist PHIL JIMENEZ, is limited to half the run. This is also the first time that the President appears on the cover of a comics magazine.
Presidents have been supporting characters in comics before: During World War II, superheroes fought Hitler as FranklinD. Roosevelt cheered them on. John F. Kennedy appeared in Action Comics #309 in 1963, when he helped protect Clark Kent's secret identity. "If I can't trust the president of the United States, who can I trust?" Superman tells Kennedy. That issue appeared a week after Kennedy was assassinated. DC Comics had to explain later that it was too late to recall the book. Presidents have appeared as more shadowy figures in recent years. "We do our best to be completely non-partisan and treat presidents with respect," Quesada says. "This is not so much a pro-Obama statement but a tip of the hat to having a Spider-Man fan in the White House."
For the comics artwork pictured above:
Artist: Todd Nauck
Colorist: Frank D'Amata
Letterer: Jared K. Fletcher
Posted by Noel Y. C. at 5:11 PM

Don't forget Reagan on the cover of the final issue of Coyote #16 (Marvel, Eclipse Comics) January, 1986.