Viewing of the Inauguration of BARACK OBAMA at Rockefeller Center 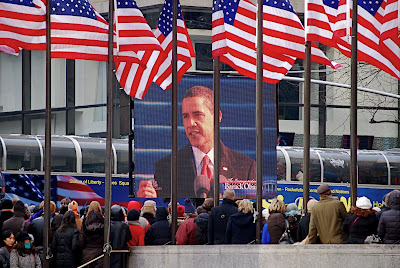 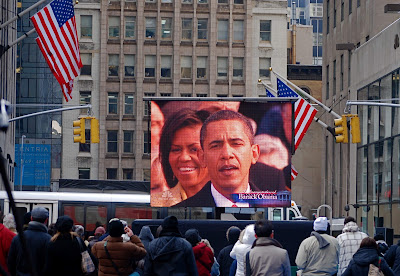 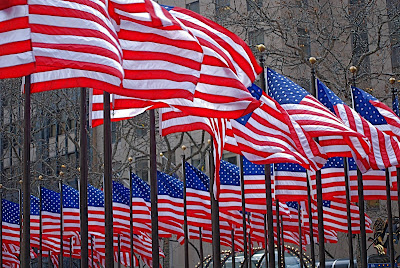 Today, a gathering was held in Rockefeller Center Plaza to watch the historic inauguration of BARACK OBAMA, the 44th President of the United States. Numerous giant television screens were installed in different parts of Manhattan including the Rockefeller Center Plaza and Channel Gardens, between Fifth and Sixth Avenues and 49th and 50th streets. Below freezing temperatures did not dampen the excitement and enthusiasm of the viewers.
From biography.com
Barack Hussein Obama was born Aug. 4, 1961, in Honolulu, Hawaii. His father, Barack Obama, Sr., was born of Luo ethnicity in Nyanza Province, Kenya. He grew up herding goats with his own father, who was a domestic servant to the British. Although reared among Muslims, Obama, Sr., became an atheist at some point.
Obama’s mother, Ann Dunham, grew up in Wichita, Kansas. Her father worked on oil rigs during the Depression. After the Japanese attack on Pearl Harbor, he signed up for service in World War II and marched across Europe in Patton’s army. Dunham’s mother went to work on a bomber assembly line. After the war, they studied on the G. I. Bill, bought a house through the Federal Housing Program, and moved to Hawaii.
Meantime, Barack’s father had won a scholarship that allowed him to leave Kenya pursue his dreams in Hawaii. At the time of his birth, Obama’s parents were students at the East–West Center of the University of Hawaii at Manoa.
Obama’s parents separated when he was two years old and later divorced. Obama’s father went to Harvard to pursue Ph. D. studies and then returned to Kenya.
His mother married Lolo Soetoro, another East–West Center student from Indonesia. In 1967, the family moved to Jakarta, where Obama’s half-sister Maya Soetoro–Ng was born. Obama attended schools in Jakarta, where classes were taught in the Indonesian language.
Four years later when Barack (commonly known throughout his early years as "Barry") was ten, he returned to Hawaii to live with his maternal grandparents, Madelyn and Stanley Dunham, and later his mother (who died of ovarian cancer in 1995).
He was enrolled in the fifth grade at the esteemed Punahou Academy, graduating with honors in 1979. He was only one of three black students at the school. This is where Obama first became conscious of racism and what it meant to be an African–American.
In his memoir, Obama described how he struggled to reconcile social perceptions of his multiracial heritage. He saw his biological father (who died in a 1982 car accident) only once (in 1971) after his parents divorced. And he admitted using alcohol, marijuana and cocaine during his teenage years.
After high school, Obama studied at Occidental College in Los Angeles for two years. He then transferred to Columbia University in New York, graduating in 1983 with a degree in political science.
After working at Business International Corporation (a company that provided international business information to corporate clients) and NYPIRG, Obama moved to Chicago in 1985. There, he worked as a community organizer with low-income residents in Chicago’s Roseland community and the Altgeld Gardens public housing development on the city’s South Side.
It was during this time that Obama, who said he "was not raised in a religious household," joined the Trinity United Church of Christ. He also visited relatives in Kenya, which included an emotional visit to the graves of his father and paternal grandfather.
Obama entered Harvard Law School in 1988. In February 1990, he was elected the first African–American editor of the Harvard Law Review. Obama graduated magna cum laude in 1991.
After law school, Obama returned to Chicago to practice as a civil rights lawyer, joining the firm of Miner, Barnhill & Galland. He also taught at the University of Chicago Law School. And he helped organize voter registration drives during Bill Clinton’s 1992 presidential campaign.
Obama met his wife, Michelle, in 1988 when he was a summer associate at the Chicago law firm of Sidley & Austin. They were married in October 1992 and live in Kenwood on Chicago's South Side with their daughters, Malia (born 1998) and Sasha (born 2001).
Posted by Noel Y. C. at 5:02 PM