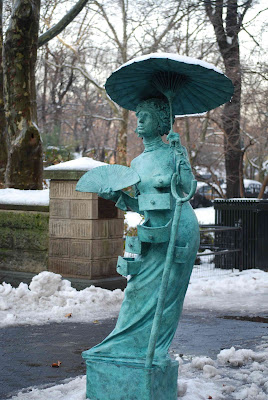 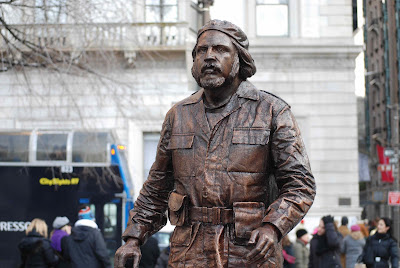 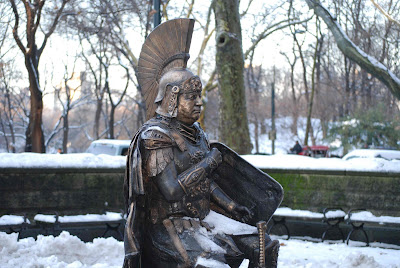 These are CHRISTIAN JANKOWSKI's Living Sculptures: a figure known as Salvador Dali's "The Anthropomorphic Cabinet Woman", the revolutionary leader Che Guevarra, and "Caesar," now installed at Central Park's Dorris Freedman Plaza.
From the Public Art Fund website:
Through April 2009, visitors to Central Park's Doris C. Freedman Plaza will come across three sculptures by Christian Jankowski that may require a second look from passersby. New Yorkers and tourists alike are accustomed to seeing the occasional performer on the streets of our city, entertaining crowds with dance, magic or impersonation. When visitors encounter Jankowski's Living Sculptures, they may at first think they are seeing three street performers, surprisingly motionless and grouped together. In actuality, the figures are bronze sculptures that reference the tradition of professional street performers who strike poses as historical or fantastical characters for passersby. Specifically these works draw inspiration from three street performers Jankowski observed and selected from a public thoroughfare in Barcelona that regularly present themselves as the likenesses of a Roman legionnaire who refers to himself as "Caesar", the revolutionary leader Che Guevara, and an enigmatic woman inspired by a figure known as "The Anthropomorphic Cabinet Woman" created by artist Salvador Dali.
Jankowski's sculptures are, in essence, statues of people performing as statues. Representing modern day figures, both real and imagined, they are exceptionally life-like, though solid bronze in their composition. Their human scale and figurative representation beckon viewers to come close, consider whether they are real people, pose next to them for photos, and perhaps even leave a few coins in appreciation. The installation of Living Sculptures at the entrance to Central Park is especially fitting given that it is a favored and prominent spot for public sculptures as well as some of the New York's actual street performers, including a frequent impersonator of the Statue of Liberty.
Posted by Noel Y. C. at 5:55 PM

I like the Cabinet Woman sculpture a lot! The concept, color and details. :)