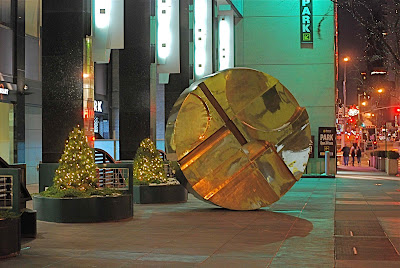 This is my night time capture of Tony Rosenthal's "Rondo", sculpture made in 1969, welded bronze, 11 x 11 x 3 feet. This piece was originally displayed at 110 East 59th Street and later moved to 127 East 58th Street in front of the New York Public Library.

From Rosenthal's official website:
Tony Rosenthal, the International Artist, renowned for his Abstract Public Art Sculptures, now 94, continues to create Sculptures that match the vitality of Works the Artist has created over the last five decades. Tony Rosenthal has recently completed a series of masterful Abstract Wood and Metal Wall Sculptures. In Rosenthal’s Wall Sculptures, the Artist has created a metaphor of "writing on the wall"; flat, hard-edged shapes, contrasting suggestions of the organic, all parts of design, shape and organization; the marriage of the hard edge and soothing curves. For example, in "Untitled" ("Two Blue Stripes"), 2007, the yellow shape resembles the profile of a woman's body, while the curved black shape looks like her rear silhouette. Rosenthal presents contrasting shapes within the confines of a geometric circle.

Rosenthal began his career creating Figurative Sculpture, and won wide acclaim. For the last five decades, Tony Rosenthal has created Abstract Sculpture that explores the Geometric Form, i.e., Cube, Circle, Square. Tony Rosenthal’s Cube Sculptures are like a city, intelligent formation with secrets, hiding, balancing and finding in limitations all the possibilities of a mixed society. Within a Cube, we see other shapes, planes, exposed creating steps or stairs, like a mountain difficult to climb. But climb we do, because it is the invention of clean geometry that makes man other than nature. It is our will.

Rosenthal’s Rings, Discs and Rondos, is another important series of Works that Rosenthal has explored over the past five decades. Rosenthal's Circle Sculptures react to the invasion of their environment, so that the Sculpture itself becomes a frame, with which to see the environment through. Being framed by the romance of a point of view, the feeling of movement, the reverberation of movement, we see the vigor from the choices that are commanded by Rosenthal’s Sculpture. Tony Rosenthal finds, discovers and reports to us what we might not have seen without him.

Best known for his large Public Art Sculptures, Tony Rosenthal creates Sculptures in a variety of mediums, including Wood, Aluminum, Cor-Ten Steel; sizes, from Maquettes of a few inches to Monumental Outdoor Sculpture of several hundred feet. Instantly recognizable and seen by millions every year, Rosenthal's Sculptures are better known by their shape and landmark appearance. Edward Albee, the Pulitzer Prize Winning Playwright, said it best in his introduction to Sam Hunter's Book "Tony Rosenthal," Rizzoli, 1999, "Tony Rosenthal goes to his studio every day, wrenches steel, bends aluminum, cuts and bolts, fashions and refines. He is both artisan and artist, rendering conscious that which his creative instinct insists upon."
Posted by Noel Y. C. at 6:57 PM

did they just roll it to the new spot? :P kidding...