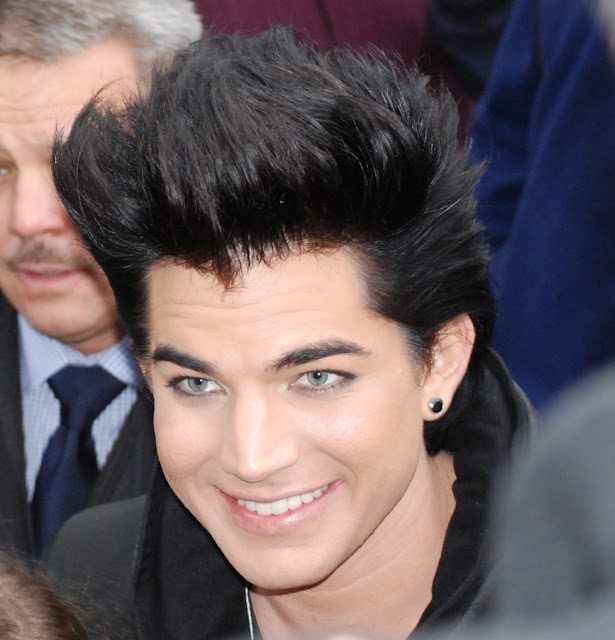 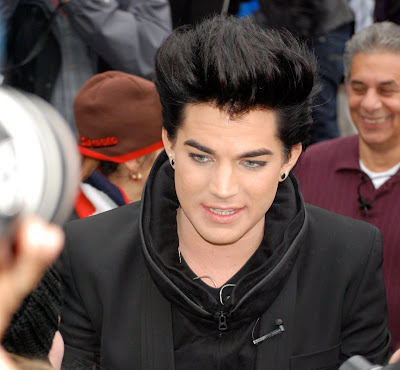 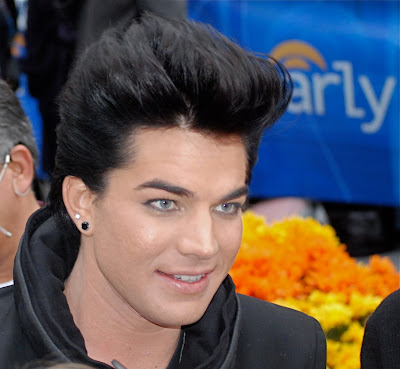 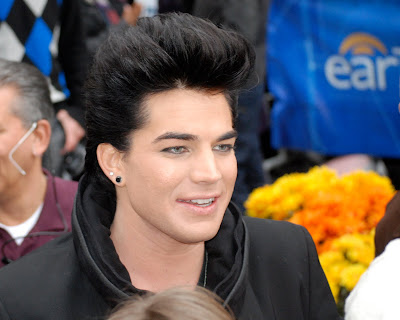 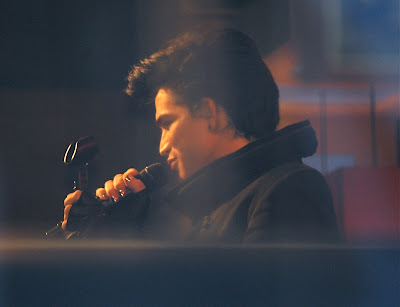 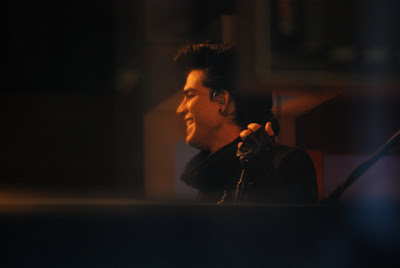 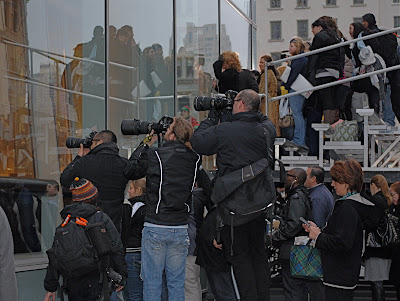 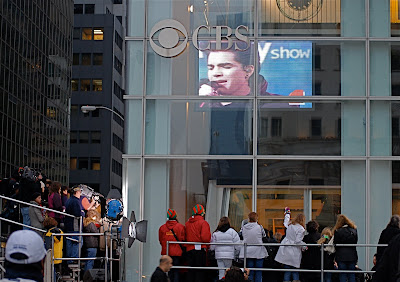 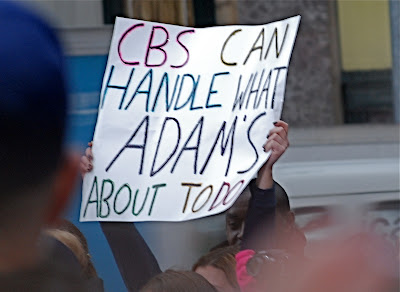 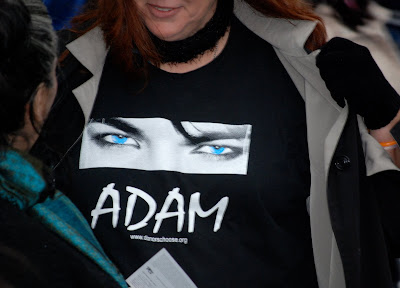 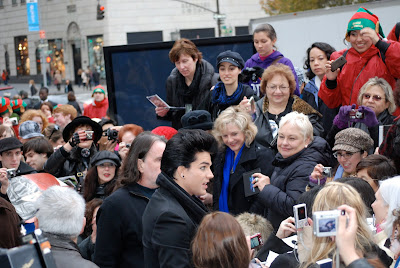 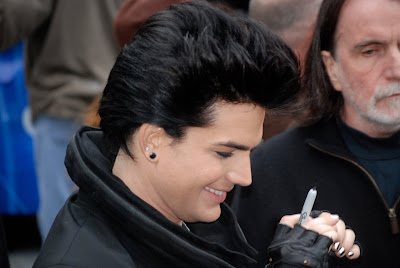 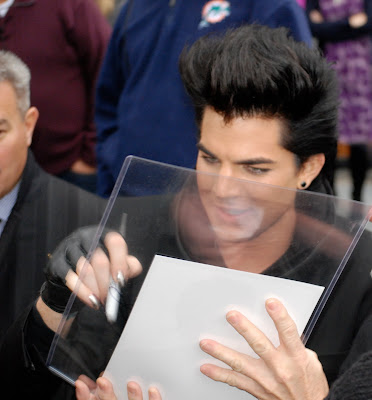 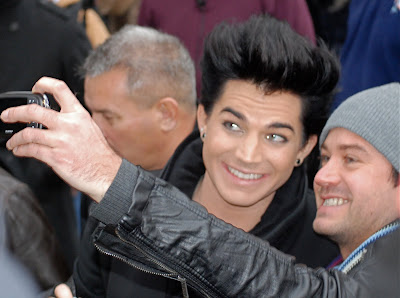 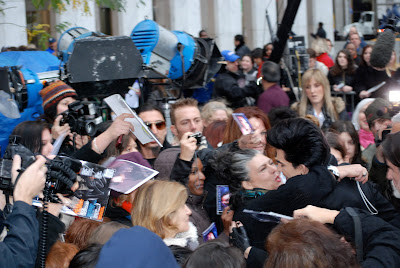 After ABC canceled ADAM LAMBERT's scheduled live performance on Good Morning America, CBS played host to the American Idol runner-up earlier this morning at "The Early Show". The cancellation was due to Mr. Lambert's controversial and "sexually charged" performance at the recent American Music Awards.

This morning, I captured these images of Mr. Lambert's indoor performance through the glass wall of The General Motors Building, as well as the autograph signing for his loyal fans outside the CBS studio. During the interview with the Early Show host, Mr. Lambert explained his side of the much talked about AMA performance. In response to the complaints of parents who watched the AMA performance, Mr. Lambert commented that he is an entertainer, and not a "baby-sitter."

Adam Mitchel Lambert (born January 29, 1982) is an American singer, songwriter and actor from San Diego, California. In May 2009, he finished as the runner-up on the 8th season of American Idol. The handsome and talented artist released his solo debut album, For Your Entertainment, on November 23, 2009. Mr. Lambert has previously played the role of Joshua in The Ten Commandments: The Musical at the Kodak Theatre alongside Val Kilmer. Lambert was one of the only actors in the play that garnered a positive review. He has also appeared in the musical Wicked as Fiyero in Los Angeles.

Your pictures are beautiful - he is just stunning.

Beautiful photos and article - thank you.

Beautiful Adam. Photographer did a great job of capturing Adam and his charisma...smile melts me! But just look at his adoring fans...of all ages..they are beautiful too.

Beautiful Adam. Photographer did a fantastic job of capturing Adam in all his charisma! Look at that smile...wow, just wow. And his adoring fans, too...they are beautiful. Thank you!

Thank you for taking these beautiful pictures and posting them for all to see. Adam doesn't owe anyone an apology for being who he is and standing up for what is right. LOVE YOU ADAM! (and NO, I'm not a GLAMBERT), just a fan.

such excellent pics, tx so much!

These are the most beautiful photos I have ever seen of Adam Lambert. Trust me I have seen them all :)

You captured his spirt!!

Wow, what a beautiful man...not just on the outside. You can see and feel his beautiful soul shining through in his performances

thank you so much for these outstanding pics

These are beautiful pictures! Thank-you so much!

What an incredible man. He is gorgeous, talented, kind, funny, intelligent, and we love him so much. Hate that the AMA's caused a bump in his rise to superstardom, but how can you keep this supernova back? Come on, folks, cut him a break. Get over it and let's get on with the show.

What an incredible man. He is gorgeous, talented, kind, funny, intelligent, and we love him so much. Hate that the AMA's caused a bump in his rise to superstardom, but how can you keep this supernova back? Come on, folks, cut him a break. Get over it and let's get on with the show.

Noel, I love the pictures. Is there anyway I can buy a few of those pictures from you? The lady in the last picture is my friend. I would love to buy a print of around 12"x 8 1/2" and have it framed for her. She will be the happest women on earth when she gets it. Can this be done? Thks!

To Martha: I think it's more convenient if I send you the original files of the photos by email and you can have them printed yourself at your local photoprinter. That way, you don't have to spend money on shipping. Unfortunately, the last photo with your friend embracing Adam is a little blurred. Let me know if this is agreeable with you.

Dear Noel, I'm the lady in the embrace with Adam. This photo so beautifully sums up the mutual warm, passionate, admiration between Adam and his devoted fans.

I want to thank you so very much for capturing this precious moment for me. I travelled far to see Adam in NYC for the ABC concert,
and was completely taken back by the sudden cancelation. Cheers for CBS for having the strength of character to pick up Adam immediately.

With my arm around Adam you can see that I'm holding my camera in my hand. Everything moved so quickly. I didn't have the time or the opportunity to arrange with someone to take a photo of me and Adam. I had to forfeit a picture for an embrace. I'm glad I did, and I’m so very grateful that you were also there at the right moment and at the right time. OMG I'm so loving you right now!!! Did we meet Noel? I think we did? Just remind me if so.

Upon arriving back home, I had only one regret. I had a story to tell about my ADAMAZING Embrace, but no picture to back it up. So you can imagine my SURPRISE, my JUBILATION, my JOY when a friend sent me your Blog...with a photo of Adam & Me embracing amongst a sea of fans and cameras...AWESOME REALLY, too wonderful for words!!!

I had a few earth angels that day who in one way or another helped guide me through this fantastic journey of mine to see Adam. You Noel are one of them.
Thank you so very much.
P.S. You’re a great photographer, I like your vision …stay creative and let’s stay in touch.