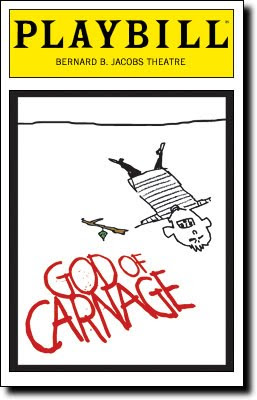 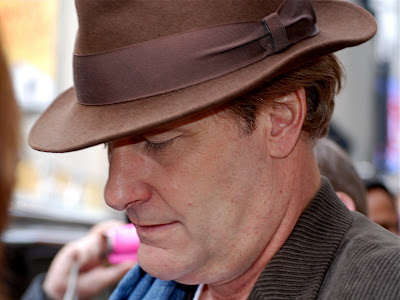 Jeff Daniels at the stagedoor of the Bernard Jacobs Theatre, 3/29/09 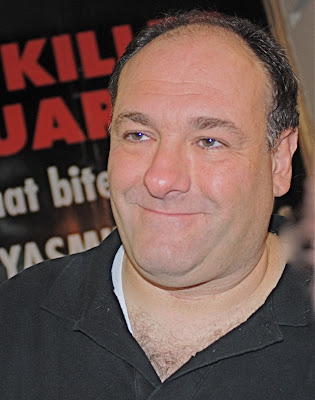 James Gandolfini at the stagedoor of the Bernard Jacobs Theatre, 9/10/09 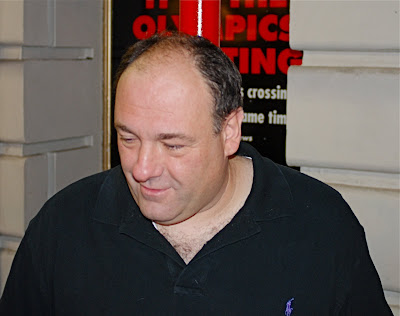 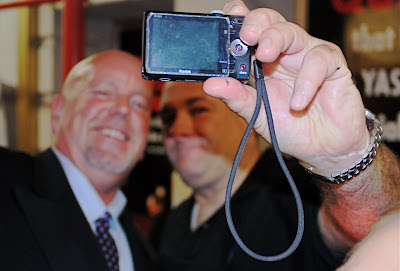 On halloween night, we caught a performance of the Tony Award winning Broadway play, GOD OF CARNAGE at the Bernard Jacobs Theatre. The play tells of two sets of Brooklyn parents who meet up to discuss the fight involving their two 11-year old sons.  Written by Yasmina Reza, the 90-minute intermissionless play was hysterical and features characters beautifully played by the original cast, Jeff Daniels, James Gandolfini, Marcia Gay Harden and Hope Davis.  These cast members will be with the show until November 14 only. A new set of cast members will join the show on November 17. The halloween night performance was sold out, so we purchased standing-room tickets for only $26.50. God of Carnage won the 2009 Tony Award for BEST PLAY. All four cast members were Tony nominated, but Marcia Gay Harden won the Tony Award for Best Leading Actress.

The “God of Carnage” reviews:

Daily News - “It’s sort of a “Who’s Afraid of Virginia Woolf?” meets “Survivor.” Once rum starts flowing, it gets louder, uglier and funnier.”

Variety - ” Examining how the straitjacket of civilized society can barely contain the primitive beast within, the fanged comedy picks an easy target in the complacent bourgeoisie. But the savagery of its dissection of interpersonal politics — marital, sexual and civic — is played to perfection by a scorching cast in Matthew Warchus’ pungent production.”

New York Times - “And their performances in Ms. Reza’s streamlined anatomy of the human animal incite the kind of laughter that comes from the gut, as involuntary as hiccups or belching.”

Newsday - “In fact, there isn’t a false cue in “God of Carnage,” Yasmina Reza’s brutally entertaining 85-minute satire that opened last night at the Jacobs Theatre with a four-star quartet of dazzling performers - one of whom happens to be James Gandolfini.”

New Yorker - “But Gandolfini, who brilliantly manages his character’s arc from genteel to goniff, earns every moment of Reza’s fun. He is a huge guy, whose size is as imposing as the brooding melancholy that makes him a dangerous presence. When Alan drops bits of clafoutis on the carpet—“I have no manners,” he says—Michael watches him from the sofa in electrifying silence, like an alligator eyeing an egret.”

Los Angeles Times - “The amusement of the piece comes from watching masks fall. Self-engrossed and morally lax, Daniels’ Alan may be the most immediately dislikable of the group, but he also the most honest about his degenerate character. Ordering an espresso when Annette is barely able to ask for water, he’s shamelessly unconcerned with what others think of him. Alan saves his double-talk for his job, not caring to put on a false face unless he’s going to be amply paid for it.”

Chicago Tribune - “Reza is an intentionally slippery and occasionally glib writer who maintains a certain irritating distance from the topical issues she brings up, and “Carnage” will be seen by some as overly pat, opportunist and bourgeoise. It is, to a point. But this is more visceral, more culturally specific, and thus far better, than “Art,” a benign soupcon compared with this very cleverly structured and frequently hilarious communal meltdown. “

Associated Press - “The real revelation of the evening, though, is Harden, usually seen in much more somber roles such as her Oscar-winning performance as Lee Krasner in the film “Pollack.” In “Carnage,” she undergoes the play’s most startling transformation — from quiet, considerate woman concerned about such tragedies as Darfur to a bellowing harridan who’s not above throwing a punch or two. It’s one of those swell, showy comic portraits that has Tony nomination (and probably the prize, too) written all over it.”

Post - “As she did in “Art,” Reza dissects upper-middle-class foils with precision and a welcome mean streak, but her plays don’t amount to all that much once the smoke has cleared. “God of Carnage” itself boils down to “Good manners only hide bad problems.”“

NY1 - “The great joy in this production is in the way these outstanding actors bite into their roles. There’s some scenery chewing as well. Jeff Daniels’ wonderfully obnoxious lawyer, initially the biggest creep, is outdone by James Gandolfini’s wholesaler whose mildmannered façade is shattered with a barrage of beautifully played nastiness.”

amNewYork - “But what really drives this production is director Matthew Warchus (“Boeing-Boeing”), who orchestrates pitch-perfect comic timing among his absolutely excellent quartet of actors.”