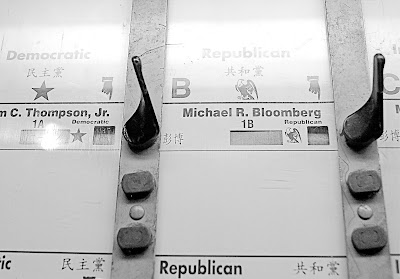 Yesterday was election day and Mayor Michael Bloomberg barely edged past Democratic rival Bill Thompson to win a third term. Mayor Bloomberg has spent almost $100 million of his own fortune on his campaign. Bloomberg had a mere 5-point victory -- 51 percent to Thompson's 46. Mayor Bloomberg is the fourth mayor to win a third term since the consolidation of New York in 1898, in the company of Fiorello La Guardia, Robert Wagner, and Edward Koch.
As in past elections, I made a picture of the lever voting machine at a polling place in Manhattan's Upper Eastside. Although these machines have been out of production since 1982, these machines are still in extremely widespread use in New York City. They completely eliminate most of the approaches to manipulating the vote count and they can easily be configured to handle a complex general election ballot. A lever voting machine completely eliminates all questions of ballot interpretation. At the time the voter opens the machine's curtain to leave the voting machine, it adds one to the counter behind each lever that was pulled down by the voter, and then it resets all the levers.
Posted by Noel Y. C. at 5:59 AM