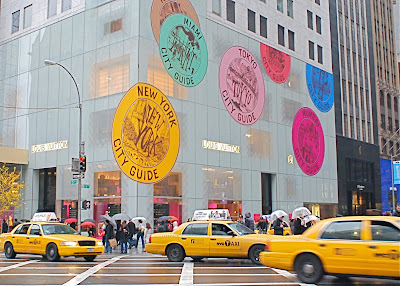 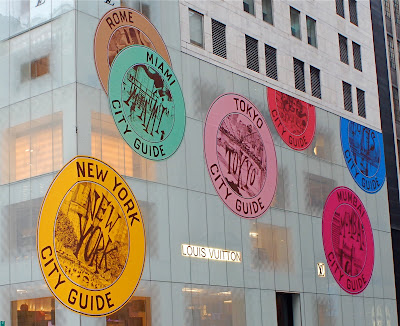 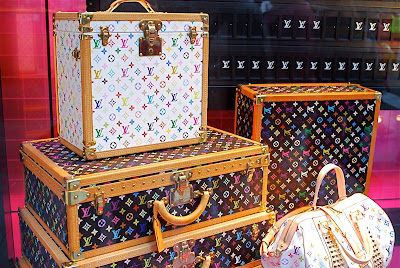 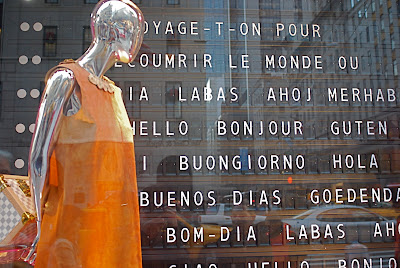 To promote its new collection of city guides, the exterior of Louis Vuitton's flagship store on Fifth Avenue features a new decor. The design is inspired by vintage luggage labels of the kind hotel bellboys would affix to travellers' trunks. Its window display has a matching travel theme.
From ilvoelv.com

Louis Vuitton has developed its collection of guides and for the first time – presents five individual volumes devoted to five cities of the world: Mumbai, Miami, New York, Paris, and Tokyo. A vibrant celebration of city life, the Louis Vuitton City Guide tirelessly seeks out new cities to explore, and regularly renews its acquaintance with others, scrupulously updating its information and addresses with every edition. In 2009, the City Guide visits 32 European cities, including six new destinations: Bucharest, Glasgow, Lausanne, Manchester, Palermo and Saint-Tropez.

One of the delights of the Louis Vuitton City Guide has always been the very personal tone with which it evokes its chosen destinations. The 10th edition goes further and invites 30 famous figures to offer their perspective on a city they know and love. The actress Monica Belluci discloses her addresses in Rome. The sommelier Georges dos Santos reveals a few secrets of Lyonnais gastronomy. The opera singer Angela Gheorghiu recounts her trips back and forth to Bucharest. The decorator Simon Doonan tells of his fascination for New York department store window displays… Each one has agreed to reveal a few of their top addresses in this new section.

The redesigned City Guide boxes reference the heritage of Louis Vuitton, drawing inspiration from a vintage luggage label of the kind hotel bellboys would affix to travellers' trunks. While deep brown makes an appearance, adding its distinct character to the collection, the guide still features the bright colours that have become its trademark over the past ten years. Pistachio Green for the European cities, Royal Blue for Paris, Rosewood for Tokyo, Magenta for Mumbai, Buttercup for New York and Almond Green for Miami.

Hi Jon. Every time she makes a public appearance in the city, she draws a huge crowd and it's impossible for me to take photos of her. I'll try to wake up early next time!

Oh wow! That would be amazing if you could! :)