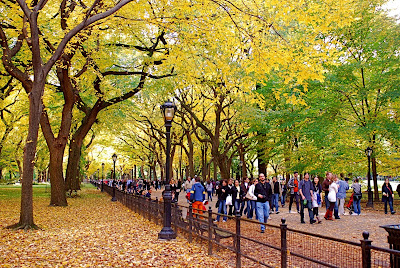 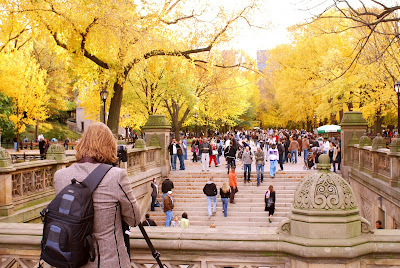 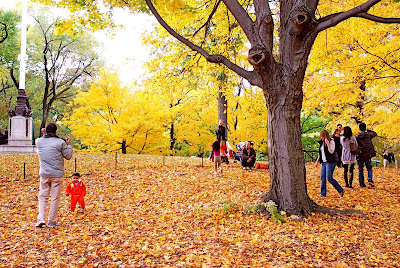 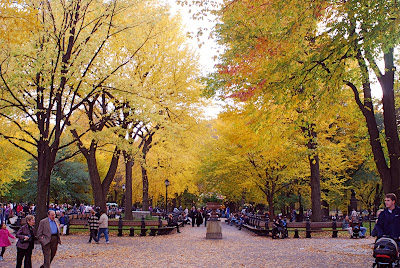 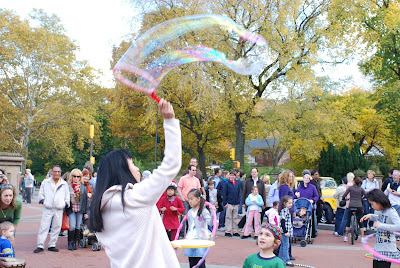 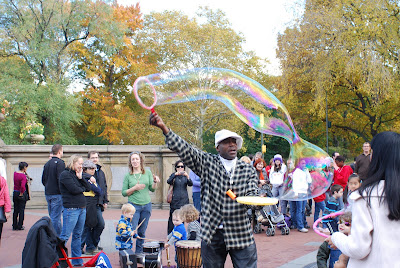 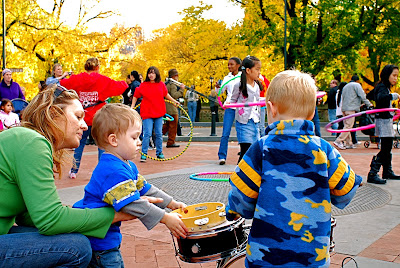 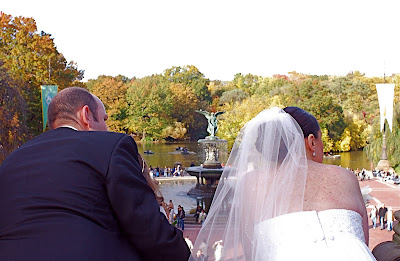 At The Mall in Central Park, near the Bethesda Fountain, Sunday, October 25, 2009

Designed by Vaux and Olmsted as a “grand promenade” the mall joins with Bethesda Terrace, both geographically and stylistically, to fulfill the park’s need for a place that offered visitors a chance to socialize; an alternative to the secluded paths and solitary walks that populate so much of the terrain. The forty foot wide Mall, flanked by its majestic rows of American Elms, provides the perfect place for a leisurely stroll in any season. One can easily imagine the scene a century ago, women with parasols and men in top hats perambulating towards the Concert Ground that stood adjacent to its northern end. Now you are more likely to find skateboards than waistcoats, but the effect is still the same and even the visitors on wheels are apt to slow down just a bit and admire the cathedral-like ambience.

The southern end of the Mall features an area known as Literary Walk that is populated with a series of sculptures depicting popular literary figures. Other personalities represented along The Mall include Christopher Columbus, Victor Herbert, and Ludwig van Beethoven. Another celebrated sculpture residing the Mall area is Christopher Fratin's "Eagles and Prey" depicting two birds of prey attacking a goat. A number of critics of the years have suggested that tableau was not exactly in keeping with the pastoral setting and peaceful nature of the park itself. Makes you wonder how the goat felt.

In the spring The Mall offers a lovely vista as you walked along the sun dappled pavement, the bright new foliage offering a latticework light green leaves overhead. In the summer the leaf bedecked trees offer a cool and shady respite from the bright skies above. The Autumn offers the view of Crayola colored leaves wafting gracefully through the crisp air and even in winter The Mall provides a striking panorama of bare branches etched against the pale sky above. Just as most its neighbors along Fifth the Park is no slouch when it comes to dressing for the occasion.

Email ThisBlogThis!Share to TwitterShare to FacebookShare to Pinterest
Labels: autumn leaves in Central Park, The Mall